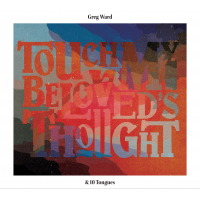 To describe saxophonist Greg Ward's Touch My Beloved's Thought as his magnum opus is to impede his development as a composer. Let's just say for many a jazz artist, if this recording were included in their discography, it would be their signature piece. For Ward, it just represents the possibilities.

The backstory to this live recording is Charles Mingus' The Black Saint And The Sinner Lady (Impulse!, 1963), a six-part composition written for dancers. Ward was commissioned to fashion a piece of music in collaboration with choreographer Onye Ozuzu to commemorate Mingus' efforts. Instead of producing a snide Mostly Other People Do the Killing knockoff à la Blue (Hot Cup, 2014), Ward chose to stand on the shoulders of giants and make music for the 21st century.

If Ward is chasing Mingus here, then he is also pursuing the music of Duke Ellington, a band leader Mingus aspired to emulate. Just as Duke and Mingus wrote music for particular players, Ward's compositions here favor his soloists. The music opens with "Daybreak," a blending of all parts of his 10 Tongues large ensemble. He breaks free with a soaring alto solo halfway through. His tone, which is often employed by drummer Mike Reed's People, Places, & Things ensemble, is delivered in full service to the music. Just as Rudresh Mahanthappa's Bird Calls (ACT, 2015) used almost imperceptible fragments of Charlie Parker's music, Ward takes pieces and parts of Mingus' Black Saint to build anew here. His nine pieces are part on one long composition, pausing only for the audience's applause.

Of note is Ward's integration of his soloists, pianist Dennis Luxion on "Singular Serenade," Norman Palm's trombone "With All Your Sorrow, Sing A Song Of Jubilance" and Keefe Jackson's baritone on "Grit." "Dialogue Of The Black Saint" opens with Jason Roebke's bass solo, before horn shouts fall into Russ Johnson's trumpet plunger blues. The music, like Mingus and Ellington before him, is folk/dance music, be it blues, gospel, Latin, march, hip-hop, or flamenco, it's all good.

Daybreak; Singular Serenade; The Menacing Lean; Smash, Push, Pull, Crash; With All Your Sorrow, Sing A Song Of Jubilance; Grit; Round 3; Dialogue Of The Black Saint; Gather Round, The Revolution Is At Hand.