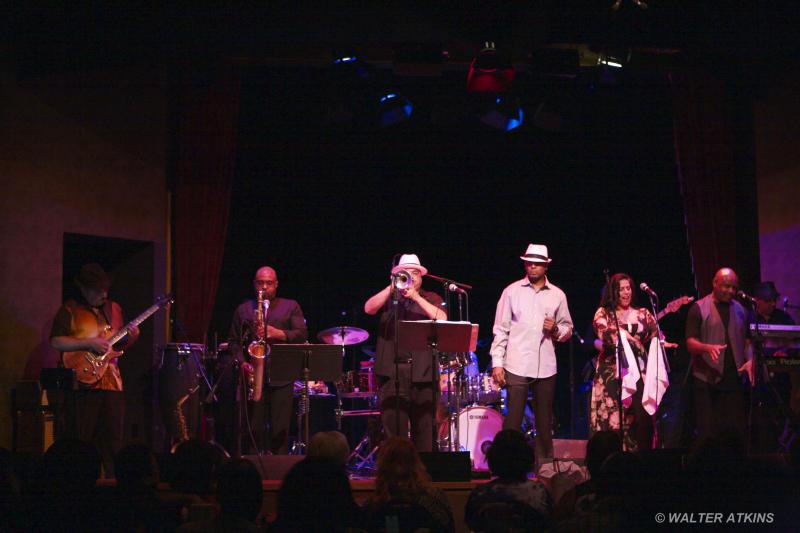 The set opened with Lounge's moving version of the classic "What's Going On" and Tortilla Soup widened things up from there. Vocalists Lounge & Quesada make a formidable pair and they demonstrated their command and range of the music individually and together. Quesada's intoxicating cover of "Lady Marmalade" was clearly a crowd favorite and one of many high lights. The full, ebullient house was dancing to the pulsating music all evening. Santana influenced guitarist Retamoza perfectly complemented Lindsay on the massive hit track "Black Magic Woman." With the solid polyrhythms provided by the percussionists, the horn section soared throughout the robust evening. On performing with the band, Lindsay said, "Tortilla Soup-a fun, energetic dance band. Always fun making a guest appearance with them."

Tortilla Soup closed their rollicking set with TOP's signature "You're Still A Young Man" and Wright's bluesy ladies anthem "Clean Up Woman." The band, along with Quesada's riotous singing on this number, brought the entire club to its feet for a boisterous standing ovation.

Local singer/songwriter Will Russ Jr was sharing a table with a visiting Swiss family. During this post eclipse week, Lamia along with her friendly husband and daughter had flown in from Europe to follow the complete eclipse route through the United States, and hear the searing Tortilla Soup band. They were flying home early the next morning and had fully enjoyed the show. Now that was serious fan support and dedicated planning.

Payne, the founder and vocalist of Tortilla Soup shared his musically inclusive inspiration for the popular Bay Area group. "When I formed the group (in 2003), I explained to the band members that I wanted to do a mix of music, not just one kind (funk, Latin, rock) etc. Some one told me, "like a soup." I said yes. Another player looked around and a majority of us were Hispanic at the time so he said "Tortilla." We laughed and 3 minutes later it was the band name -I kept it. I told the band that there was no written rule or law that said we could not play everything. And to this day we hold that same concept: We Play It All!"

On the wide range of their selected material, Payne explained his method. "Well for the most part, I pick all the songs. It goes to the vision I had of playing everything from R&B, Funk, Old School, Latin, etc. When I first started the group, I did not want to be called a funk band or rock band. I wanted to be known as A Variety Band. I am the youngest of 6 and grew up listening to the music of my brothers and sisters-The Beatles, The Doobie Brothers, Motown, Earth, Wind & Fire."

When asked what the band's most exciting gig to date was, he offered, "Fresno California had a show called Cinco de Mega a few years back. Sponsored by Mega 97.9 FM Radio station. It featured every top Latin, Old School band that had made it to radio at one point in their existence: Tierra, MALO, El Chicano, Sunny Osuna, Barbara Lewis and more.

He continued, "Tortilla Soup got a call from Pacific Concert Group CEO Alan Beck, who asked us to join this show. One, I was very honored to be asked. But what got me the most was, I had grown up listening to these groups on the radio and now we were going to join them—A cover band with no original song played on the radio ever!! Why us?? Alan Beck told me it was because we were liked. We were good and people were asking him to put us on the ticket, so he did. What an honor to play with such legends."

During the post eclipse week, Tortilla Soup with Tony Lindsay provided a polished night of classic music covering a rich range of genres to a receptive Yoshi's audience. Their spicy mix sparkled brightly this night and brought people from the San Francisco Bay Area and around the world together. This was a pretty hip legacy for the spirited band that convincingly demonstrated one of its founding principles: "We Play It All!" And they played it all well.