Home » Jazz Articles » Tops in '10: The Best Big Band Albums of the Year

Tops in '10: The Best Big Band Albums of the Year

By Jack Bowers
December 3, 2010
Sign in to view read count
The holiday season is upon us, which means it's a perfect time to name my choices for the best big band albums of 2010. Looking back, this was a better year for large ensembles than memory envisaged, and narrowing the list of candidates to 10 wasn't as easy as I thought it might be. Nevertheless, the task has been completed, and here are my Top 10 choices, accompanied by a few words about each from my reviews in Big Band Caravan:

1. Mike Barone Big Band, Flight of the Bumblebee. Everyone is sharp and well-rehearsed...while the rhythm section makes all the right moves and drives the band with power and finesse. Meanwhile, Barone's resplendent arrangements eclipse even their laudable efforts, making Flight of the Bumblebee a strong contender for anyone's big-band Album of the Year.

2. Phil Woods / DePaul University Jazz Ensemble, Solitude. Woods is as animated and inventive as ever, swinging lustily and full of vim and vigor at age 78, while director Bob Lark's enterprising undergrads urge him on with inspired blowing on every number.

3. Cheryl Bailey / Three Rivers Jazz Orchestra, A New Promise. Although the world was deprived of who knows how much memorable music when guitarist Emily Remler succumbed to a heart attack, Bailey and the Three Rivers Jazz Orchestra have gone the extra mile to keep her memory alive, and A New Promise is an homage that surely would have warmed her heart and brought a smile to her face.

4. Les Hooper Big Band, Live at Typhoon. If you've heard Hooper's band before, you may safely discard all previous impressions, as Live at Typhoon is essentially unlike any of its previous recordings, even though Hooper's compositions and arrangements remain as fresh and invigorating as ever. There's simply more adrenalin flowing, more excitement and intensity on a concert date, which is one reason (among many) that Hooper's CD can be endorsed without pause.

5. Phil Kelly and the Northwest Prevailing Winds, Ballet of the Bouncing Beagles. Kelly is a master of tempo and dynamics, as the listener can appreciate throughout the wide-ranging session, which spans the rhythmic spectrum from burner to ballad, the geographic landscape from New Orleans to Latin America, with a soupcon of smooth jazz appended to season the medley...By any measure, Beagles is another impressive outing by Kelly and the Prevailing Winds, one that must be counted among the early front-runners in any 2010 Album of the Year sweepstakes.

6. Allen Carter Big Band, Gifts. Perhaps the best word with which to describe Carter's musical temperament is "happy." Every number is imbued with a natural buoyancy and warmth that makes it a pleasure to hear and appreciate. Of course, it doesn't hurt to have some of the most accomplished sidemen one could hope to muster reading the charts, which are invariably engaging, as is the entire album.

7. Dani Felber Big Band, More Than Just Friends. Felber has undeniably molded his ensemble in the Count Basie image with seven of the album's dozen numbers written by Frank Foster, the others by Felber. Even though it's generally ill-advised to foretell anyone's response, it's pretty safe to assume that if you're a Basie fan you're going to love this.

8. Nova Jazz Orchestra, A Time of Reckoning. The ensemble is supple and swinging on every number, the soloists sharp if not spectacular. The rhythm section is unswerving, and Nova doesn't overpass the value of color and dynamics...A Time of Reckoning is another sizable step forward for the Nova Jazz Orchestra, which continues to reap benefits from its stability and experience.

9. Stan Kenton Alumni Band, Have Band Will Travel. Unlike other "road" albums, Have Band rarely endures the uneven sonic bumps that bedevil many concert performances. Hats off to engineer Tom Johnson for that. And hats off to Mike Vax (Kenton class of 1970-72) and everyone in the band for producing such a marvelous recording under less than optimal conditions.

10. Vaughn Wiester's Famous Jazz Orchestra, Jazz Tempo. There are a number of things always to be counted on when appraising a new album by trombonist Vaughn Wiester's Columbus, Ohio-based Famous Jazz Orchestra (which isn't really "famous" in the truest sense of the word, but should be): the music will be live (and lively), the choice of material consistently engaging, the orchestra itself earnest and swinging from the opening downbeat.

And there you have them. As noted, there were tough choices to make, as we reviewed a number of other first-class big band albums during the year including (but not limited to) the following: Glenn Cashman And the Southland Big Band; Frank Macchia, Folk Songs for Jazzers; Stan Kenton, This Is an Orchestra!; the Fred Hess Big Band, Hold On; Michael Treni, Turnaround; the Joris Teepe Big Band, We Take No Prisoners; the Dan Gailey Jazz Orchestra, What Did You Dream?; Chie Imaizumi, A Time of New Beginnings; the Buselli-Wallarab Jazz Orchestra, Mezzanine; Bobby Watson and the UMKC Jazz Orchestra, The Gates BBQ Suite, and new releases by the University of North Texas One O'Clock and Two O'Clock Lab Bands. In all, another pretty impressive year for big bands. 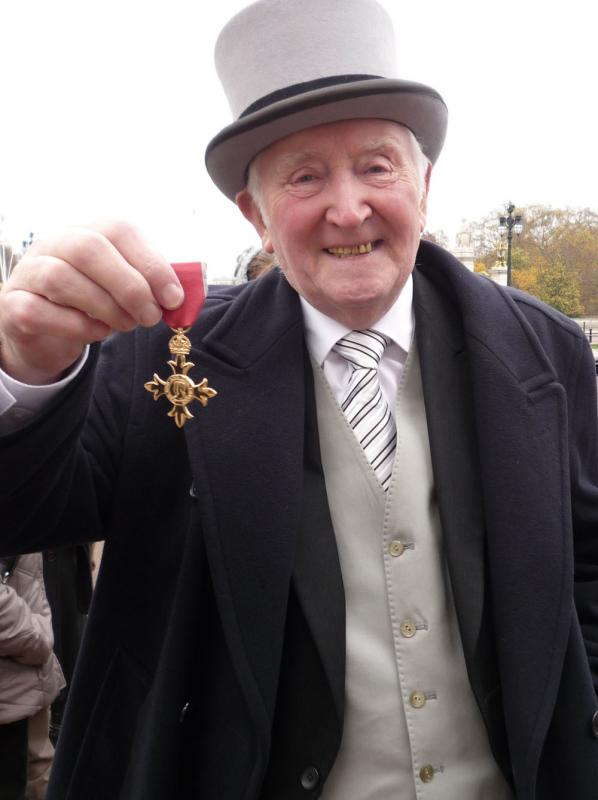 Bill Ashton, who founded Great Britain's superlative National Youth Jazz Orchestra (NYJO) in 1965 and served as the orchestra's music director for 45 years before stepping aside, traveled to Buckingham Palace on November 25 for his investiture as an Officer of the Order of the British Empire (OBE). He had received an MBE (Member of the Order etc.) in 1978. Ashton, a saxophonist / composer from Blackpool, Lancashire, served in the Royal Air Force before attending Oxford University (1957-60) where he began playing professionally and founded the Oxford Big Band. Returning to London, Ashton spent time as a teacher while playing in various big bands. In 1965, he and Pat Evans formed the London Schools Orchestra, which later became the National Youth Jazz Orchestra. Besides leading NYJO, Ashton wrote the music and lyrics for a number of songs performed by the ensemble for its various albums and public appearances. Other honors include the BBC Radio 2 Jazz Award (1995), a silver medal from the Worshipful Company of Musicians, and a fellowship from the Leeds College of Music. NYJO's upper age limit is twenty-five; many of its alumni are among Great Britain's most accomplished and sought-after musicians, and we have Bill Ashton to thank for that. On a more personal note, if it weren't for Ashton I probably wouldn't be doing this. He was the first person to ask me to write a CD review, something I'd never even considered. I submitted the commentary to Cadence magazine, and it was rejected because Cadence didn't accept freelance reviews. A month later, Bob Rusch, the head man at Cadence, asked if I'd like to write for the magazine, and the rest, as they say, is history. Thanks, Bill.

3. Dan Gailey Jazz Orchestra, What Did You Dream? (OA2)