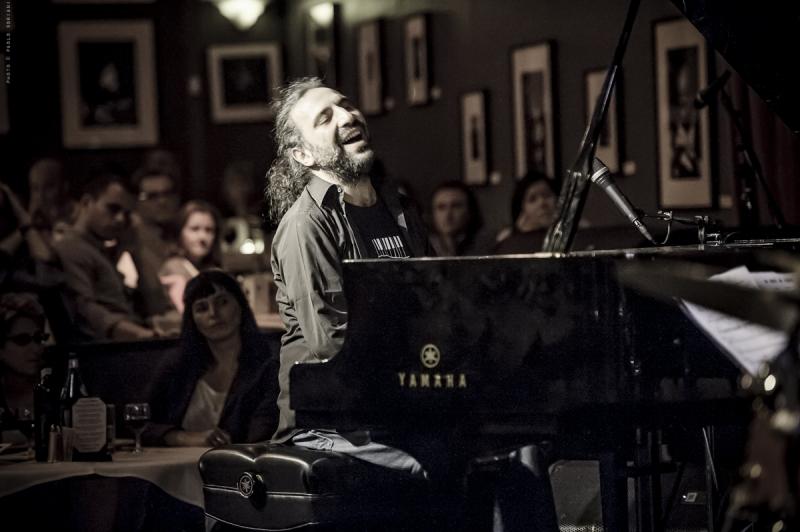 Birdland is at 315 West 44th Street in Manhattan. Taxis can drop you at the door. But if you come by subway, you pass through Times Square, that outrageous canyon where night is bright as day, with its teeming, dazed multitudes. The assault on the senses that is Times Square makes Birdland feel like a cocoon, a safe haven. The lighting is subdued, and the vibe is discreet and refined. There are tables with candles and white tablecloths in concentric arcs around the stage. Birdland is neither as legendary as the Village Vanguard nor as entrepreneurial as the Blue Note. But it is one of the best places in the United States to hear music, with a history legitimately traceable to 1949.

Since 2005, there has been a week of "Top Italian Jazz" at Birdland every year. Most of these events have been presented by the Umbria Jazz Festival organization. Others were produced by Enzo Capua, the Umbria organization's U.S. representative. In July of 2013, the Umbria festival in Perugia, one of the largest in the world, will celebrate its 40th anniversary. The week of Italian jazz at Birdland was a precursor to the big party in Perugia.

Three ensembles each played two nights. The first was a duo of American pianist Uri Caine and trumpeter Paolo Fresu of Sardinia. On opening night the club was jammed and the atmosphere was electric. Birdland is never more elegant than during Italian Week. People dress up. The menu is different. Chef Claudio Brugalossi was brought in from Perugia to prepare special dishes like purée of lentil with rosemary infusion and wide tagliatelle in black truffle sauce. Each night featured a different Umbrian wine list.

The Caine/Fresu duo is a marriage founded on contrast. Caine is precise and erudite, with a hard, percussive touch on the keyboard. Fresu is a heart-on-sleeve romantic. The first piece was "Dear Old Stockholm," and it set the rules of engagement. Caine got a brilliant, steely sound from Birdland's Yamaha. His intricate lines provided a grid wherein Fresu, on flugelhorn, pursued subtle melodic variations on the old Swedish folk song. Fresu's sound, especially on flugelhorn, is so gentle and luminous you can lose yourself in its sensual gratifications. Then you may not immediately notice how, prodded by Caine, he has been ratcheting up the intensity. Fast tunes like "Cheek to Cheek" and "A Night in Tunisia" were contrapuntal mazes. Many piano/horn duos become busy and overwrought when the two players, faced with so much open space, rush frantically to fill it. Caine and Fresu mostly avoided this pitfall. Caine stayed faithful to his own strict language, a postmodern concept containing classical formalism, witty stride and jolting syncopations, and Fresu played all around and through Caine without colliding.

But the sweet spot of this duo is ballads. Fresu usually played them muted. On "I Loves You Porgy," his long lines were fervent whispers of passion and pain. Eventually the emotion became too intense to permit variation, and single held notes hung forever in the night air(the extension of these notes was facilitated by electronics, which Fresu uses subtly and selectively). Another ballad came from 17th century Venice, "L'Amante Bugiardo" by Barbara Strozzi. It was pristine, solemn and stately. 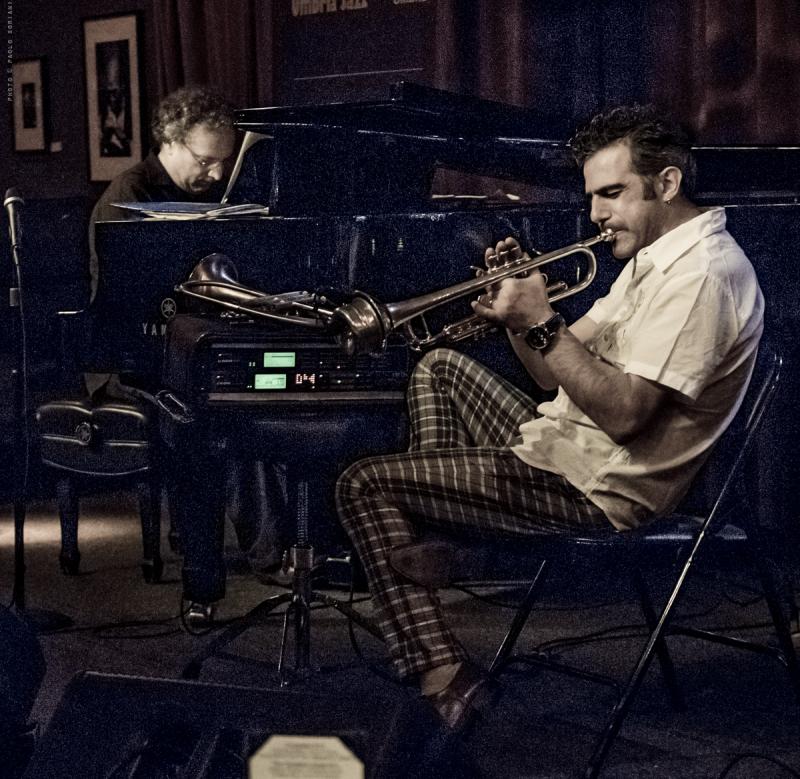 Given that Caine and Fresu have been playing together for over a decade, it was surprising that the second set contained the same repertoire as the first. But there was one exception, and it was the highlight of the night. "I Thought About You," the most permanent collaboration of Jimmy Van Heusen and Johnny Mercer, was first portrayed on muted trumpet, then on open flugelhorn. Fresu is not an innovator. He comes out of Chet Baker and Miles Davis. But he plays true to his soul, with unerring grace. On "I Thought About You" he did what he does best, which is weave a spell. Caine was right there with him, in stark distillations of the storyline. What makes this duo work is that there is a zone where they overlap, where you hear the lyricism in Caine's austerity, and the well formed ideas at the core of Fresu's romanticism.

The third and fourth nights of "Italian Week" were the most anticipated. In the last two or three years, the realization has spread through the world jazz community, even reaching its most culturally isolated and ethnocentric regions, like the United States, that Stefano Bollani is one of our greatest living pianists. He appeared at Birdland with what he calls his Danish Trio, because bassist Jesper Bodilsen and drummer Morten Lund are from Denmark. For the first set on the first night, there was a completely full house and Birdland was buzzing.

An evening with Bollani is a unique jazz experience, encompassing technical virtuosity, joyful creativity and wild hilarity. Bollani's command over his instrument is so complete that he functions differently from his peers on piano. Even players like Jarrett and Mehldau and Moran pursue specific paths of thought through an improvisation. Bollani is able to sustain multiple concurrent lines of inquiry at any tempo he chooses, including insanely fast. The opening piece, "No Pope, No Party," was lights-out, a collective frenzy, Bodilsen and Lund plunging and cracking, Bollani rocketing. When it was over, you realized that they had been unfolding a vast design while they raced. 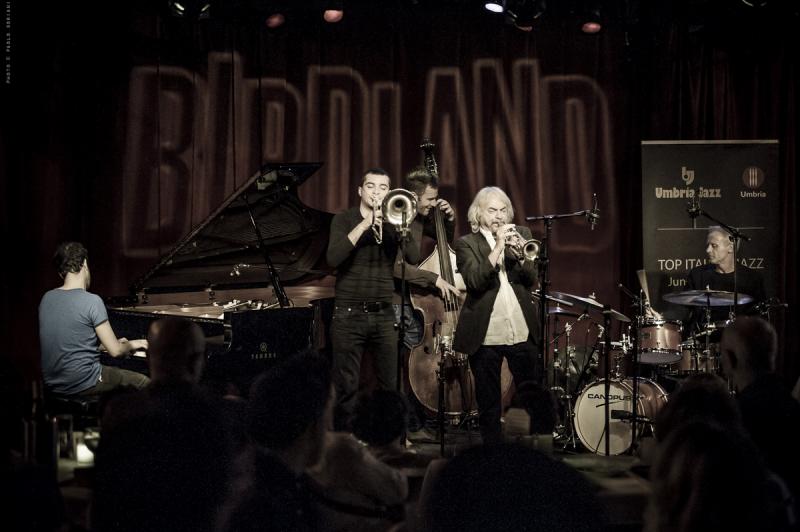 Perhaps because operating a piano at a very high level is too easy for him, Bollani constantly parodies his own process. His sense of mischief is always in competition with his serious aesthetic commitment, and mischief often wins, at least temporarily. He teased his sidemen with jokes both verbal and musical. He aborted tunes and started over on a whim. He played a satire of a song with his right hand while dramatically conducting his three-piece orchestra with his left. He also sang as if he had forgotten he was not in the shower ("Billie Jean," "Besame Mucho") and whistled ("Smoke on the Water"). The latter was a huge crowd-pleaser (apparently many in the audience remembered Deep Purple). Bollani is a genuinely funny man and a natural entertainer, but it was hard not to feel that the jokes took up too much precious time. Without all the fooling around, he would have been able to include more pieces like "There Will Never Be Another You" (which he played both nights) and "All the Things You Are." He reimagined them completely, overwhelming them in new invention but occasionally allowing their melodies to blow by.

His range is extraordinary. He is a poetic, flowing, sensual interpreter of Jobim ("Portrait in Black and White"). He can do rapt ballads at any tempo, from the freely associative rapid streaming of "How Deep Is the Ocean" to barely moving, haunting mysteries like Bodilsen's "Min Sommerfugl." He writes addictive tunes in seven like "I've Never Been to Africa," a prancing celebration of many human tribes. He can hit a piano note with such strength it rings in every corner of Birdland, or so softly you have to lean forward to hear it (he can also play notes with his elbows and the backs of his hands).

The trio has been together ten years. Lund, one of the underrated drummers in jazz, fulfills his role with athletic precision, erupting in all the right places. Bodilsen has grown enormously over the years and is now an eloquent, stirring bass soloist. Bollani often lets him take the lead. The last tune they played at Birdland, the encore after the second set on the second night, was a ballad. Bodilsen was in the center of it, and he returned to the yearning melody over and over again, like a song his heart could not relinquish. Only the Italians in Birdland knew it: "Come Prima," a pop tune from the 1950's. The Americans who were present know it now.

On the last two nights, Enrico Rava's band Tribe recorded a live album for ECM. The personnel was Gianluca Petrella (trombone), Giovanni Guidi (piano), Gabriele Evangelista (bass) and Fabrizio Sferra (drums). This group made a studio album for ECM, Tribe, released in 2011. To describe them as tight risks missing the point. They are tight enough to be wildly free and loose. However far off course they independently veer, they always come back together and land exactly on the one.

Rava, in his 74th year, can knock you out of your chair with his shattering trumpet spikes. Petrella is the most visceral and exciting trombonist in jazz, pure energy and flamboyance, stabbing the air with his slide, spattering ideas everywhere. Guidi is a young pianist capable of arcane lyricism, as demonstrated in his new album City of Broken Dreams. In Tribe he is more likely to match the fire of Rava and Petrella with crashing chordal crises of his own, and keyboard-length glissandos.

They played some of the Rava tunes from the Tribe album, like "Planet Earth," "Choctaw," and the title track. They also played pieces from earlier albums, like Rava's "Jessica Too" and "Serpent," and Don Cherry's "Art Deco." But there was an issue with the ensemble's approach to every song. It was that the emphasis on group interplay at the expense of solos became a limiting factor. On the first pieces of a set, it was fun to hear Rava and Petrella in their slithering rough (or locked) theme unisons and contrapuntal cacophony and staccato counterpoint. They have played together since Petrella- now 38- was in his 20's, and they are gifted at inciting, paraphrasing, contradicting, and inspiring one another. But over the course of an entire evening, their insistence on nearly always playing together became frustrating. They are both imposing jazz soloists, but they almost never truly soloed. Neither Rava nor Petrella had more than a few moments alone before the other entered. The focus on collective improvisation also meant that Guidi and Evangelista were given very little solo space. It felt like Rava had chosen to put his band in a box. You waited for him to open the box and set his soloists free. He never did.

But the rewards of these nights in Birdland far outweighed the frustrations. "Top Italian Jazz at Birdland" is not only one more reason to like New York in June, it is a reason to go there. Even through Times Square.

Thomas travels frequently writing about jazz outside the borders of the United States.