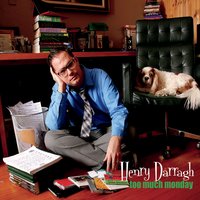 My introduction to Houston Jazz came with the receipt of Jacqui Sutton's Billie & Dolly (Toy Blue Typewriter Productions, 2010). A few short months later, I received Henry Darragh's Tell Her for Me (Self Produced, 2011). When I compared the musical personnel for each of these recordings, a light came on in my pea brain alerting me to the fact that Houston may not be so big after all. There was quite the overlap in musicians between the two releases. Happily, I have become acquainted with what I call the "Houston Jazz Mafia," a group that includes, but is certainly not limited to: Sutton, Darragh, saxophonists Alisha Pattillo and Woody Witt, guitarists Paul Douglas Chester and Chris Cortez, trumpeters Dennis Dotson and Carol Morgan, singers Tianna Hall, Danielle Reich, and Raquel Cepeda, and drummer Tim Solook . This is the rich bedrock of the Houston music establishment.

One of the central figures is multi-instrumentalist Darragh. His contributions to Sutton's aforementioned Billie & Dolly and her outstanding Notes From The Frontier: A Musical Journey (Toy Blue Typewriter Productions, 2012) demonstrated his talent and value as a collaborator. Darragh's excellent Tell Her For Me show him an equally creative leader and composer. Too Much Monday raises the ante higher with a larger band and more exceptional original material.

First things first. Darragh is a singer and a damned fine one. He has a voice belonging to a school pioneered by Chet Baker that continued to improve with the added voices of Andy Bey, John Proulx, Beat Kaestli and Jeff Baker. These men sing with a natural sweetness that is at once genuine and, because of this authenticity, warmly sensual. But Darragh does not just sing. He is a smacking good pianist and trombonist also, displaying all three talents on the opener, "Like Someone In Love." Too Much Monday is divided about half-and-half between live and studio performances. Leading a septet, Darragh splits arranging duties with bassists Glen Ackerman and Erin Wright. This "little big band" offers Darragh many options for musical direction and orchestration.

Darragh also divides in half instrumental and vocal pieces. All of his originals are instrumental and range from a gently balladic "Leveled Out" to a breezy island romp in the title tune. "Our New House" is a quaintly autobiographical waltz featuring is horn section comprised of trumpeter Dennis Dotson, trombonist Andre Hayward, and saxophonist (Seth Paynter). Dotson's "You Probably Don't Remember Me" is a quiet ballad featuring the trumpeter and Darragh on piano. Darragh's "Waiting for the End" is not dark as it sounds. To the contrary, it is a sunny waltz featuring the whole ensemble.

Of the singing, it is very easy to imagine Darragh opening ("Like Someone in Love") and closing ("Just the Way You Are") this disc, singing directly to his beautiful wife Melissa. Darragh's singing has matured and emotionally deepened (something Chet Baker could have never done) since is recording debut. Billy Joel's "Just the Way You Are" is the disc's foundation. Darragh crosses the better part of 100 years of jazz and popular music performing this piece. It opens in the late 1970s with a light Bossa Nova introduction that evolves into some of the most intriguing avant-garde play that still colors between the lines. It is a revelation. Paynter goes all Archie Shepp on the leader and ends the recording with a bold look at the future...and it is bright.

Like Someone in Love; Laura; Too Much Monday; I Should Care; Small Day Tomorrow; Out New House; You Probably Don’t Remember Me; Waiting for the End; That Lucky Old Sun; Just the Way You Are.

Title: Too Much Monday | Year Released: 2015 | Record Label: Self Produced