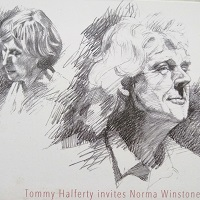 Though the collaboration between Irish guitarist Tommy Halferty and English singer Norma Winstone goes back twenty five years, this, surprisingly, is the duo's debut recording. That it came about at all is thanks to the lever pulling of Irish jazz impresario Allen Smith, who first brought Winstone across the pond in the early 1990s. Winstone and Halferty's chapter opened in 1993 and they have delighted audiences intermittently ever since. This record, released on Allen's own label, sees Winstone, and Halferty on acoustic guitar, embrace jazz standards, Brazilian tunes and popular songs.

The album title suggests Halferty's hand in the song selection, while the inclusion of material by John McLaughlin, Larry Coryell and John Abercrombie provides further evidence of his steerage. Winstone, however, is just as sublime singing wordlessly as she is interpreting a lyric, her ethereal flight on McLaughlin's "This is for Us to Share" and her improvised scat on Hermeto Pascoal's "Leo Estante Num Instante" being the pick of the bunch.

Halferty, who has worked with Stephane Grappelli, Lee Konitz, Benny Golson and Seamus Blake, among others, is widely considered to be the best modern jazz guitarist in Ireland. Late career recordings such as the African-influenced Burkina (Self Produced, 2015), Station Midi (Lrp, 2018)—both with Kevin Brady and Dave Redmond—and the experimental, chamber-esque Maelstrom (Self Produced, 2016) with pianist Izumi Kimura, attest not only to the fire in his belly, but to his willingness to explore.

This outing with Winstone is, by comparison, one of the more laid-back entries in Halferty's discography. There are flashes of the guitarist's brilliance, notably on a gorgeous reading of Kenny Kirkland / Sting's "Dienda," and on the self-penned ballad "Step for Lara," whose plaintive melody is enhanced by Winstone's bitter-sweet lyrics. Halferty's role in this duo, however, is more that of a tune-smith subtly gilding the melodies, and as accompanist to the evergreen Winstone.

Five decades into her career, Winstone still has few peers in the jazz vocal department. Her voice occasionally sounds a little weathered in the higher registers, but her emotional weighting of a lyric remains a thing of beauty. She makes familiar standards her own, unearthing nuances in Bernice Petkere / Joe Young's "Lullaby of the Leaves" and Johnny Green/Edward Heyman's "Out of Nowhere" that make them sound newly minted. Her whispery reading of Ric Marlow / Bobby Scott's "A Taste of Honey," delicately buoyed by Halferty, is an album highlight.

Spare arrangements of Antonio Carlos Jobim's "Double Rainbow"—erroneously co-credited on the CD sleeve to Katy Perry—and James Taylor's "Long Ago and Far Away" are gentle mood pieces. More satisfying is the duo's free-spirited chemistry on Coryell's "Wrong is Right." On the set closer the pair pay tribute to Abercrombie, with whom they both collaborated, gently tracing the late guitarist's "A Nice Idea."

This is a satisfying recording of beautiful tunes, lovingly rendered. Hopefully, now that the monkey is off their back, there will be further studio collaborations from Winstone and Halferty, doyens of their respective crafts.

Dienda; Lullaby of the Leaves; This is For Us to Share; Leo Estante Num Estante; Out of Nowhere; A Taste of Honey; Step for Lara; Double Rainbow; Long Ago and Far Away; Wrong is Right; A Nice Idea.