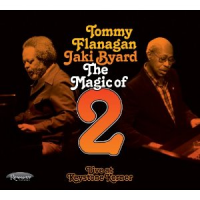 San Francisco's famed Keystone Korner shuttered its doors in 1983, but it's getting more press today than plenty of clubs that are still serving up jazz. In the past two years alone, a previously unreleased live recording of trumpeter Freddie Hubbard—Pinnacle (Resonance, 2011)—launched Resonance Records' Keystone Korner Live Discoveries series, photographer Kathy Sloane released Keystone Korner: Portrait Of A Jazz Club (IU Press, 2011) to great acclaim, and the club's owner—tireless jazz advocate Todd Barkan—started hosting/curating "Keystone Korner Nights" at New York's Iridium (in January of 2013). Now, more love for this venue and the musicians it hosted comes via The Magic Of 2, a previously unreleased recording from 1982 that features piano icons Tommy Flanagan and Jaki Byard.

While some might assume such a pairing would be a study in contrasts, with Flanagan's more sensitive and measured approach standing apart from Byard's eclecticism, that assumption would prove false. When they join forces, as on five of these tracks, they meet somewhere in the middle; Flanagan is feistier than expected and Byard's outré antics are tempered. Together, they tip their hats to Charlie Parker ("Scrapple From The Apple"), Duke Ellington ("Satin Doll"), and Miles Davis ("The Theme"), among others, and their brilliance in merging and balancing shines at every turn.

The promise of this pairing is chief among the selling points of this album, but the six solo performances—three from each man—may outshine the duos over time. Hearing Flanagan ruminate on the music of Billy Strayhorn is an absolute treat. His interpretations are timeless and he always manages to slip in some smile inducing idea, like a prominent-but-passing reference to "Lush Life" during "Chelsea Bridge." Byard, who plays the role of a centrist during the duo numbers, broadens his vision when left to his own ample devices. His all-encompassing knowledge of jazz, ragtime and twentieth century music in all its shapes and forms comes to the fore when he visits in on material like Stevie Wonder's "Send One Your Love," Chuck Mangione's "Land Of Make Believe," and the infrequently covered "Sunday." While his stupendous solo work from his San Francisco stays has already been documented on Sunshine Of My Soul-Live At The Keystone Korner (HighNote, 2007) and A Matter Of Black And White-Live At The Keystone Korner, Vol. 2 (HighNote, 2011), this recording makes it abundantly clear that lightning struck every time Byard took his place behind a piano at Barkan's club.

The Magic Of 2 clearly speaks to the skills of two dearly departed, high profile ivory ticklers, and the importance of the club that hosted them, but it also speaks to the vision of a label. In just a few years time, Resonance Records has become one of the leading lights in historical jazz recordings. They pay great attention to details and deliver liner notes that are crammed full of interesting essays from related and/or knowledgeable parties; in this case, that list includes Barkan, jazz historian Dan Morgenstern, jazz journalist Howard Mandel, pianists Renee Rosnesand Bill Charlap, and several others. Resonance has already given us previously unreleased recordings of Hubbard, a young Wes Montgomery, and Bill Evans; now they've solidified their standing with this one. It's safe to say that the jazz community is waiting with baited breath to see what they'll unearth next.

Introduction; Scrapple From The Apple; Just One Of Those Things; Satin Doll; Something To Live For; Send One Your Love; Our Delight; All Day Long; Sunday; Chelsea Bridge; Land Of Make Believe; The Theme.