By HRAYR ATTARIAN
December 27, 2015
Sign in to view read count 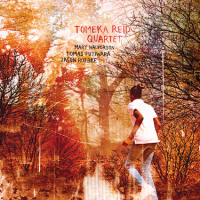 As an accomplished composer and improviser, cellist Tomeka Reid, is an integral part of Chicago's creative music scene. In addition to being an educator, Reid is a versatile and tireless performer both in her hometown and beyond. Moreover her unique style graces the works of such luminaries as flutist Nicole Mitchell, multireed player Anthony Braxton as well as her own collaborative trio albums. The tense and thrilling Tomeka Reid Quartet is her first release as a leader.

The, mostly original, pieces bubble with a fiery intensity and a deep-seated lyricism. Despite their intriguingly complex texture there is ample room for individual expression. Reid crafts the captivating "Billy Bang's Bounce" from a heady mixture of boppish themes and languid, West African inspired motifs. Innovative powerhouse, guitarist Mary Halvorson, weaves an angular and enthralling improvisation around Reid's expectant reverberations. Reid's own furious solo brims with intelligence and flirts passionately with atonality. The stormy group play gracefully returns to the lilting head.

The quartet members also have superb camaraderie with one another. On the Latin tinged "Etoile" Reid and Halvorson engage in an eloquent conversation that percolates with intense emotion and inventive ideas. Roebke's bittersweet tones, during his time in the spotlight, reflect Reid's mellifluous and nostalgic melody. Fujiwara's rolling drums add a delectably dark undercurrent to the collective sound.

Reid's debut is a stimulating and mesmerizing work that showcases the superlative cellist's artistry at its best. Her exquisite instrumental prowess as well as her brilliant writing make this a singular record. This splendid and elegant freshman is just a glimpse of Reid's outstanding career.