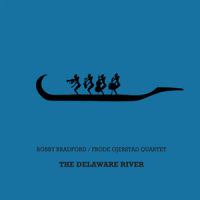 This live date from Philadelphia in 2014 forms the seventh in a string of releases by the Bobby Bradford and Frode Gjerstad quartet. Their association dates back to 1986 when cornetist Bradford first encountered Norwegian reedman Gjerstad as part of co-operative group Detail, convened by drummer John Stevens. All of that experience shows in the relaxed but practiced concision as they navigate through four seat of the pants negotiations on this limited edition LP. It's one of their best showings since Through The Woods (CIMP, 1997), and shares similar qualities in its openness, organic evolution, and the close balance of playing and listening.

On cornet, Bradford's blues-infused lyricism and fanfares color the whole session. He favors short urgent phrases, mixing reveilles and folk imbued lines which are reminiscent of his old mentor Ornette Coleman. Gjerstad's longer drawn out legato on alto and clarinet veer between keening, yelping and querulous by turns. Norwegian bassist Ingebrigt Håker Flaten maintains a thrumming undercurrent which both preserves a pulse and provides a steady commentary. Chicago-based drummer Frank Rosaly in this setting is a revelation. Although busy his combination of tappy rat-a-tat and timbral variation allows the music to breathe and doesn't obscure the contributions of his bandmates.

But at the heart of the concern is the winning contrast between Bradford rootedness and Gjerstad's abstraction. A quicksilver passage for a capella horns during "Delaware" illustrates the interaction perfectly. Elsewhere Rosaly and Bradford sound like they are channeling drums and bugle corps repertory, though in fragmented and extended format. In a surprising change of pace, the final "1965 Was Amazing" opens with disconcerting blues shouting in a frayed voice, uncredited but likely Bradford, shadowed by upper register pizzicato bass and Gjerstad's gentle alto which together intensify the air of vulnerability. A sequence of muted cornet and saxophone follows, once more communing in the conversational give and take which characterizes this splendid album.