Kenneth Whalum III: To Those Who Believe

By JON WERTHEIM
February 28, 2011
Sign in to view read count 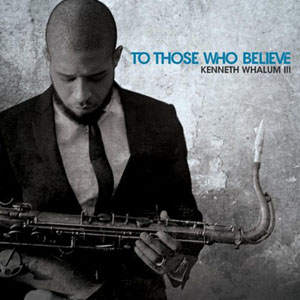 Perhaps three really is the magic number—at least for today's tenor saxophonists. Walter Smith III has been making waves in the contemporary jazz world for years now, but another "three" has been developing a distinctive and fresh style, albeit more quietly.

Kenneth Whalum III is the most recent addition to a venerated musical family. The saxophonist released To Those Who Believe, his self-produced debut, at the end of 2010. It's not just a first release, however, it's also a mission statement, full of the kind of uplift, awareness and personal connection—not only with music, but with the whole world—that has defined the hip-hop/jazz generation, a generation no better exemplified than by pianist Robert Glasper and his trio—Whalum's backing band.

The record starts off at a peak. "If We Try" builds on a softly pulsing groove laid down by Glasper's trio, building on Whalum's tenor saxophone and samples of his father's voice, all of which reaches a climax near the middle of the track with a repeated riff, stated by wordless vocals. The sound is both electronic and acoustic—fast and slow—emphasizing the connections between the modern and the historic, and spoken word and the phrased note.

To Those Who Believe, having flown so high so early, inevitably finds itself, Icarus-like, sinking closer and closer to the ground. Whalum has obviously drawn from John Coltrane—an influence easiest heard on "Hope For Today," "Benediction," or the McCoy Tyner-esque "STS"—but needs more time to sound fully at home with this influence and let his own sound shine through. "So Simple," a rubato ballad, is almost predictably so, but the title track, played on soprano, starts with a hint of Kenny G (and "The Nearness Of You"), but is saved by Whalum's pure tone (without too much vibrato), Derrick Hodge's arco bass and, as with "In Search Of A Melody," Glasper's hip-hop-savvy backing, turning into a fitting companion to the album's opener in mood and effect.

Whalum sounds most comfortable on "A Song For Tomorrow," where he channels some Joshua Redman, with a few twists, and Glasper gets his Aaron Goldberg on. Whalum has also spent years as a backing player andsideman, and he can slip into this role easily, as on "It Was Written," another standout track, featuring rapper Common.

Glasper, Hodge and drummer Chris Dave are consistently rewarding sidemen, playing very much in the style of their own work but always supporting and contributing to the flow that Whalum builds over the course of the disc.

Patchy in places, brilliant in others, To Those Who Believe is an ambitious effort from a saxophonist trying to make his own name. Personal, and true to his sound, it meets Whalum's mission in making this record. It has its weaknesses, but Whalum is clearly a musician with the vision and chops to turn them into music as strong as the best moments of To Those Who Believe.

If We Try; Hope For Today; A Song For Tomorrow; Gratitude To Crystal; In Search Of A Melody...; So Simple; "STS"; To Those Who Believe; It Was Written; Benediction.

Title: To Those Who Believe | Year Released: 2011 | Record Label: Self Produced