Manfred Kniel and his Reduction Quartet: Low Down Music 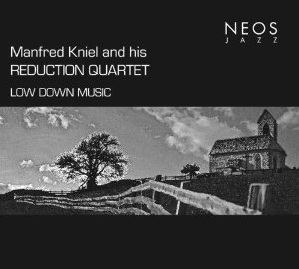 Drummer Manfred Kniel has leadership status on this release, and all the compositions are his. But this is also, perhaps, the key to the music's shortcomings, especially when the rhythmic vitality the leader habitually imparts is not matched by some other equally compelling element. His sly and sometimes witty melodic sense seems often to be a mere afterthought, something he feels obliged to tack on so as not to run the risk of creating a musical monoculture. The results feel like somewhat slapdash music, especially in view of the sometimes contrived humor which goes with it.

"Klagelied" provides a pertinent example. The theme is pretty negligible, perhaps no more than something on which to blow in the time-honored fashion, but the variations on it are far from compelling and take in a drum solo which highlights Kniel's vitality.

The heavy-handed humor comes to the fore on "Pozilei," and it's frustrating, in no small part, because it prevents a true picture of trombonist Mike Svoboda's instrumental personality. It also has the air of a pastiche from the Art Ensemble Of Chicago at itsmost playful, but that band's singular grasp of the art of tension and release is substituted with a kind of contrived grandstanding. It's true that, as the piece progresses, Svoboda and trumpeter Karl Farrent get the chance to strut, but their efforts are undermined by an apparent unwillingness to get loose.

"Eklat" highlights how incidental bassist Veit Hubner's contribution can be. The three-note motif which opens the piece is a kind of antithesis to anything with the potential for in the moment development, and proves the harbinger of the kind of disruption on which Kniel, the composer, seems to thrive. Farrent's solo is a model of economy, but given the material he's working with, it couldn't realistically be anything else.

It all makes for rather wearing listening, especially as there is the seed of something special here. Whether that seed grows into something substantial can't be predicted at this moment, especially given generally transitory nature of band lineups.

About Manfred Kniel and his Reduction Quartet