BY MARK CORROTO
September 11, 2016
Sign in to view read count 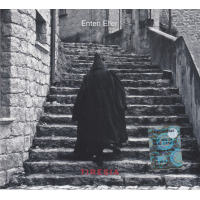 The Italian super-gruppo Enten Eller returns with Tiresia a set of improvisations for the epicurist. I suggest the music connoisseur who prefers to indulge in the prolonged unwrapping of their experience can get the most out of the three lengthy compositions this quartet delivers. Maybe a better phrase would be, gives birth to.

Their music can come from individual compositions, or as we have here, not free improvisation, but orchestrated improvisation. The shortest piece clocks in at nineteen minutes, the longest a nearly thirty-two. The quartet participates in a sort of simmering improvisation, boiling their creation gently to allow all the flavors to bubble to the surface.

"Morgane le fay" opens the disc with Brunod's acoustic guitar that opens a conversation with Maier's bass. Mandarini and Barbiero enter, each establishing his own patterns that intersect, knitting a narrative that wouldn't be out of place in Manfred Eicher's ECM Records catalogue. As the piece progresses, Barbiero works through differing percussive sound and Mandarini applies effects to his horn, not unlike that of Jon Hassell and Ben Neill. The impressive element here, is that as the players shift into effects, the integrity of the themes remain. Same for "Andromedia" with Brunod's guitar now electric, he utilizes the subtlest effect to maintain the quartet's chosen atmosphere. The music blossoms organically, Barbiero busying himself with energizing percussive works as Brunod tears off a blues passage and Maier's bass is freed to sing. The mood though is a bit melancholy as the music eases it's tender legs into the finish.

The highlight of the set is the lengthy "Aylan" with guest violinist Emanuele Parrini. The quartet, now a quintet trods a similar path as the previous pieces, except Parrini adds another dimension. His plucked and bowed violin teases the music to pause and Mandarini and Mandarini switch to varying effects to alter their sound. This narrative flows through valleys and hills with Parrini fully integrated into Enten Eller's approach. This is music you can inhabit, it cohesion throughout.