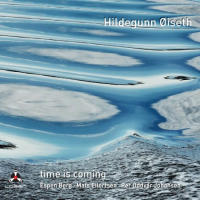 Norwegian trumpeter/composer Hildegunn Oiseth has been a full time professional player since age 24, beginning with the Bohuslän Big Band. She has been featured in several projects with the Trondheim Jazzorkester, and can be heard hosting national radio shows. In addition to trumpet and flugelhorn she has been fascinated with more ancient instruments, including the "bukkehorn" (goat horn, so called because it is made from the horn of a ram or goat) heard on two tracks here. She brought an especially skilled, empathetic group into Oslo's famed Rainbow Studio—the site of so many ECM recordings over the years—with engineer Jan Erik Kongshaug at the controls. Pianist Espen Berg, bassist Mats Eilertsen (Food, Tord Gustavsen) and drummer Per Oddvar Johansen all contributed tunes as well, giving the project a cooperative feel.

Opener "Hildegunn vuelie" is the only outside composition. Norwegian keyboardist/composer Frode Fjellheim wrote it inspired by yoik, a Sámi vocal tradition—much like his song "Eatnemen Vuelie" from the Frozen movie soundtrack. It begins the album on a traditional note, with Øiseth's trumpet taking the vocal role. "Skoddefall," the first of Berg's tracks, continues in a moderate 6/8 feel, with a recurring, song-like theme. Even in this evenly matched group, Berg is arguably the Most Valuable Player, contributing two memorable songs and a lot of sparkling piano playing. Eilertsen's "Vise" is the ballad of the set, a lovely lyrical showcase. Øiseth's title tune introduces the goat horn, initially in duet with the piano. It's a lonesome, plaintive sound. The rest of the band comes in gradually, building to a dramatic piano solo.

Eilertsen's "22" has a long bass introduction, then continues in similar rubato fashion after the band enters (with Øiseth's mellow flugelhorn in the lead). "Savolainen" (again from Øiseth's pen) similarly begins rubato, but eventually shifts into an explosive bebop feel, only introducing the theme at the very end. Berg's "Velkomst" begins with a long, rhapsodic piano introduction, followed by a bass solo. Øiseth enters on flugelhorn some five minutes in—a clear demonstration of her democratic band leading style. Johansen finally provides a composition with the closing "Families," a pensive feature for the goat horn.

This is frequently sparse, impressionistic music made by great players with a shared vision. Yet it's anything but monochromatic: it goes from rubato to rhythmic, traditional to modern. A beautiful example of Norwegian jazz, it marks Hildegunn Øiseth and the rest of her band as players to watch. A reunion would be most welcome