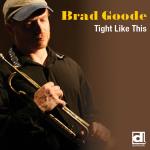 Tight Like This is trumpeter Brad Goode's fourth Delmark release and it's clear, perhaps more so than with any of his previous three, that his musical path is littered with subtle delights the like of which take their time to appreciate. Sure, he's capable of virtuosic flight as much as any highly accomplished trumpet player, but he knows that in these early years of the twenty-first century it takes something more than that to catch the ear.

So, while his quartet is one of the most beautifully integrated units out there, it's clear there's something extra special going on in a band that manages to paint Irving Berlin's "Reaching For The Moon" with shades that suggest the late singer/songwriter Nick Drake. In the midst of an unassumingly innovative reading, both Goode and pianist Adrean Farrugia turn in solos grounded by extraordinary harmonic senses, while the bass/drums team of Kelly Sill and Anthony Lee cover all bases.

Freddie Webster's "Reverse the Charges" is one of those compositions which, prior to this reading, might have never appeared on the radar. Still, the quartet gives it an airing which transcends the repertorial, into the realm of the reimagining. A muted Goode floats trenchantly above the momentum generated from the bottom up, while Farrugia proves himself to be one of the current scene's most imaginative pianists.

Goode's "Midwestern Autumn" is as wistful as the title might imply, but there's little of the gauchely sentimental in its rendition. The trumpeter possesses an uncommon and individual conception in his muted playing, demonstrating some of Art Farmer's storytelling ability. But this wouldn't amount to much if the quartet weren't highly adept at thinking as one—an attribute that, clearly stemming from a lot more than regular gigging, gives the track such cohesion.

There may be those who, with some justification, think the world doesn't need another straight reading of "Softly, as In a Morning Sunrise"—and this band might, to a man, be among that group. It would certainly account for why this rendition is so rarefied, even as the group pulls off the not inconsiderable feat of retaining the spirit of a song where Goode turns in yet another telling solo, enhanced by the quartet's evident unity.

Tight Like This; Changes; Nightingale; Reaching for the Moon; Reverse The Charges; Summary; Midwestern Autumn; Climbing Out; The River; Bob's Bounce; Softly, as in a Morning Sunrise.