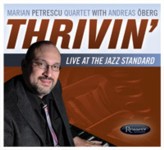 Called "The Horowitz of the Piano" by French jazz great Martial Solal (under whom he studied) pianist Marian Petrescu's dazzling technique—reminiscent of the late Oscar Peterson—is on full display with Thrivin', recorded at New York's Jazz Standard.

Petrescu was born in Bucharest, Romania, in 1970. Coming from a large family of musicians, he began playing piano at age 4 and went on to study classical and jazz in Sweden and Finland. He made his jazz debut at 15 and gained international success in subsequent years, performing in festivals worldwide. He has played with many stars, including Arturo Sandoval Toots Thielemans Al Jarreau and Tony Williams. When not performing, he teaches both classical and jazz in his own music school in Finland.

As Peterson often did, Petrescu works with a quartet, here featuring the great Andreas Oberg on guitar, David Finck, bass, and Mark McClean, drums. Each is given much space on the CD to shine in his own right.

Petrescu pays homage to his idol with the opener, Peterson's "Cakewalk," which introduces the infectious group blend, punctuated here with an explosive flurry of notes by Oberg. On Rodgers and Hart's ballad, "My Romance," Petrescu shows his lyrical gift and indicates a kinship to another piano great, Bill Evans. This track also features a notable bass solo by Finck.

Evans comes to mind again on "Blue in Green" (co-written by Miles Davis and Evans) which contains a long introduction by Oberg, capturing the song's stately mood. Finck's bowed bass heightens the stark atmosphere. With another Peterson composition, "Blues Etude," the feeling quickly changes. Oberg's guitar goes lowdown on this, and Petrescu's bluesy effects add to the funky atmosphere.

Ferde Grofe's classic "On the Trail" section of the "Grand Canyon Suite" often gets jazz treatment but almost never with the gusto that Petrescu's group exhibits. The leader's galloping piano rhythm urges all on to a sensational ending.

The furious pace continues in the Lehar and Smith operetta tune, "Yours Is My Heart Alone." Petrescu's lightning fingers at the opening yield the spotlight to Oberg's torrid guitar and Finck's clever, assertive bass.

To use ancient hip phraseology, this recording is a "gas" all the way.

Cakewalk; My Romance; Blue In Green; Blues Etude; On The Trail; Yours Is My Heart Alone; Indiana.