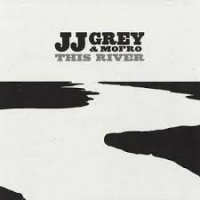 Grey is a multi-faceted musician —a singer and songwriter who also plays (electric and acoustic) guitar, bass and harmonica—and so This River flows in several different streams. "Tame a Wild One" tears a page straight out of the John Mellencamp book of earnest, retrospective roots-rock songwriting. Grey lifts Mellencamp's entire book for a simple acoustic ballad about an even simpler country man, with his pedal steel moaning "The Ballad of Larry Webb." And it seems worth considering how Bruce Springsteen might take on this title track, especially these closing lines: "Where did my soul go? Where did my spirit hide? Why won't they rescue me from the pain in my mind?"

"Write a Letter" and "Somebody Else" are soulfully languid and painfully blue, their guitars aiming right for your gut (and below) as their rhythms roll as slow and powerful as the mighty Mississippi. In a perfect musical universe, Otis Redding would have lived long enough to sing them both.

But make no mistake: Grey and his Mofros know how to party. To begin this set, the drummer counts off four, the guitarist claws in like an alley cat, the bassist sneaks in like a bad man in the night, and the opening "Your Lady, She's Shady" takes off! "Florabama" rocks with all the steamy heat of the US southern gulf, and a scalding hot pot of instrumental sweet blues jam bubbles up from "Harp & Drums." Grey's voice also suggests the hearty country blues funk of Otis Redding in "99 Shades of Crazy" (which would sound like something off The Faces' A Nod is as Good as a Wink...to a Blind Horse [Warner Bros., 1971] if the drums were mixed a little louder).

This River is also a great representation of JJ Grey & Mofro's live performance sound. "We set up much like we do for our shows, and cut the tracks as close to live as possible," Grey explains. "There's something about everybody getting into one room and playing together. It brings some spark that can sometimes get lost in the shuffle of too much overdubbing."