BY KARL ACKERMANN
November 13, 2015
Sign in to view read count 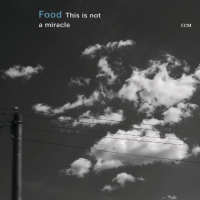 Since the formation of Food, more than a dozen years ago, the duo at its core, saxophonist Iain Ballamy and drummer Thomas Strønen, have remained the nucleus of a small but impressive coop of players who have added their unique creative ideas to an already out-of-the-mainstream entity whose philosophy has been to stun without their lasers on full force. This is Not a Miracle continues the Food ritual without looking backwards or forsaking well thought-out processes.

The "guest" on This is Not a Miracle is more positioned in the category of the extended family than a drop-in. Austrian guitarist and electronics player Christian Fennesz has been a regular contributor with appearances on Quiet Inlet and Mercurial Balm (ECM, 2010, 2012). Fennesz was faced with the daunting task of filling spots once occupied by Nils Petter Molvaer and fellow Norwegian trumpeter Arve Henriksen, both fundamental influences in Food's previous outings.

Strønen has noted that the current release was one where he was not compelled to be quite as democratic in terms of group input. Rather, the electronics and percussive maestro was inclined toward working more within constructs of his design and in a more straight-forward way, but not at the expense of the special ambience that has become a critical element in Food's sound. In the months that followed the initial recording session, Strønen put everything on the table in terms of back room manipulation.

With Ballamy, Strønen and Fennesz all credited with electronics, it's never clear from where the effects are emanating. But Fennesz's guitar is either frequently masked in electronic effects or simply meant to take a secondary role. Not so for Ballamy's sax which ushers in long, fluid melodies in contrast to Strønen's sharp and insistent drumming. It all comes down more on the side of lyricism despite the preponderance of electronics.

The sum of the parts here is more important than the individual pieces in that there is an organic flow and feel to the album when taken in its entirety. Food continues to evolve in ways that are more obvious when direct comparisons are made between albums. Like well-trained athletes, these players have a way of making it all sound easier than it is. This is Not a Miracle is not a miracle, in fact. What it is however, is another mindful collection of compositions that look at jazz music with an open mind and equally open process.