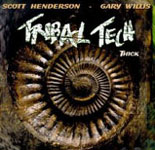 Tribal Tech co-leaders Scott Henderson (guitars) and Gary Willis (bass) sought a new direction with this latest release, the band's ninth. In the past, Henderson and Willis conceived their compositions in advance, then fleshed them out in the studio. This time they entered the studio without any preconceptions and just spent three days jamming and recording. Afterwards the quartet selected the best moments and added a few embellishments.

Thick may be the boldest effort yet from one of the most uncompromising bands in the fusion genre. Don't expect any wimpy made-for-radio melodies from Tribal Tech, because this group lives up to its name. With riotous outbursts of rhythm and energy, the Techsters spawn the jazz equivalent of heavy metal.

Any time musicians of this caliber get together to jam it's bound to be interesting, and except for one annoying cut that's mercifully brief ("Clinic Troll"), Thick should wow most hardcore fusion fanatics. This is an explosive, electrifying collection by Henderson, Willis, Scott Kinsey (keys) and Kirk Covington (drums).

Henderson said his objective with Thick was to create a freer environment for his bandmates. "Joe Zawinul was the first bandleader I played with where things were loose, and he wanted it that way," said Henderson. "You really could jam and just do the things you do. You could own your own parts and play them differently every night if you wanted to. That's a freedom that I never really had as a sideman (with Jean Luc-Ponty and Chick Corea). And I think it's cool as a bandleader to give Scott and Kirk that kind of freedom too, so it makes them really feel like playing. Because what they come up with on their own is ultimately better than anything I could ever write out for them anyway."

Thick opens with a monster cut entitled "Sheik of Encino." This track begins with a Zawinul-like groove, shifts through an eerie interlude, then builds to a hard-rocking climax driven by Covington's high-octane drumming and some exhilarating riffing by Henderson. I also love "Somewhat Later," an all-too-brief track that marries bluesy dobro with an exotic Chinese-like melody.

Other tracks include "Party At Kinsey's," a spacey Afro-funk piece featuring Kinsey's synthesizers. "Jalapeno" is another Weather Report-style groover propelled by Kinsey's electric keyboards and Henderson's zigzagging guitar. The title track is an 11-minute stop-and-go groove thing energized by an incredible screaming solo from Henderson. "You May Remember Me" is an atmospheric piece dedicated to the late comedian Phil Hartman. Lastly, the two leaders trade some nasty licks on the eccentric blues excursion "What Has He Had?"

Thick crackles with edgy improvisations, shifting grooves, bleeping and buzzing electronics, and wildly imaginative solos. It's real team effort, as all four musicians play off of one another. Henderson and Willis continue to showcase their superlative capabilities, and Kinsey is no slouch on keys. Covington really impresses with a frenzied performance on drums.

If you're looking for a laid-back listen with some pleasant melodies, this ain't it. But if you like your fusion very loud, rhythmic and totally uninhibited, Thick is strongly recommended.