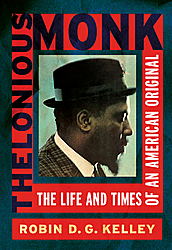 This is an authoritative tome that pulls aside, without completely lifting, the shroud of mystery that has long surrounded one of the most enigmatic figures in the history of jazz. Exhaustively researched over a period of more than a decade, Kelley, who spoke with nearly every one of his subject's living relatives, friends and colleagues, paints a vibrant portrait of Monk, the man and the musician, within the context of the times in which he lived. Beginning with the genealogical/social background of Monk's enslaved North Carolina ancestors, Kelley takes his readers on a journey that illuminates not just the plight of Monk, but of many other African-Americans of his time. His focus on Monk's family (most notably his incredibly supportive mother Barbara and equally loyal wife Nellie), neighborhood (New York's San Juan Hill) and friends (especially the Baroness Pannonica de Koenigswarter) does much to promote a deeper understanding of the pianist's humanity.

Of course, Monk's music is the most important facet of the man and Kelley traces its development with a trained eye and ear. He does much to ensure that the pianist is given the oft withheld credit as one of the true progenitors of the music known as bebop during his tenure as coleader, with drummer Kenny Clarke, of the house band at Minton's. At the same time, he sets him aside from the movement itself as a more idiosyncratically creative individual whose unrelenting attention to melody and rhythm placed him in a continuum with the great Harlem stride pianists who preceded him. His evaluation of Monk's earliest recordings for Blue Note shines a telling light on a period of both concentrated artistic creativity and the frustrating critical neglect; one that would only end when he became the subject of media scrutiny that often overlooked his role as an important composer and innovative pianist and instead focused on his sometimes erratic eccentric behavior that was actually the result of the undiagnosed bipolar condition that is considered later in the book.

Monk's rise to fame during long-term engagements on the Bowery at the Five Spot, the Bowery Bohemian mecca, and particularly the legendary months with John Coltrane, are examined in depth, as are the varied critical reactions to his increasingly lauded music and the popular press' obsession with his unique sartorial style, penchant for dancing and alleged drug addiction. New York's cabaret law is exposed as a repressive force that sorely limited Monk's ability to earn a living and support his family, undoubtedly a factor in causing the manic depression that marred his eventual success as a financially secure major label recording artist and internationally-acclaimed bandleader.

Kelley spends a good deal of time dispelling the myth that Monk was a childlike, taciturn character disengaged from the world around him, revealing a man that was well-informed and, although compulsively engaged in his music, still utterly conscious of the civil rights struggle that was ongoing in this country, as confirmed by his frequent participation in benefit concerts supporting various liberal causes. At over 500 pages (including nearly 100 footnotes that are often as interesting as the narrative itself), the volume is full of invaluable information, contributed by those who were there (especially Monk's son Toot, long time manager Harry Colomby and final tenor saxophonist Paul Jeffrey), that brings to life an artist full of contradictions that may never be fully explained.