Hal Galper Trio: The Zone: Live At The Yardbird Suite

By DAN MCCLENAGHAN
November 19, 2019
Sign in to view read count 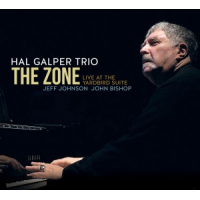 Pianist Hal Galper has rounded out a career spanning five decades with his stint at Origin Records, beginning with Furious Rubato (2007) and wrapping things up—or so it was rumored—with 2018's Cubist. Most of these are trio affairs featuring bassist Jeff Johnson and drummer John Bishop, with Cubist adding saxophonist Jerry Bergonzi to the mix. All of them respresent Galper's quest for the perfection of the elastic approach to tempo called the rubato style. And it could be credibly said that perfection has been achieved.

The Zone: Live At The Yardbird Suite captures Galper in perhaps the most mesmerizing of his Origin Records sets. He and his long-term trio with Johnson and Bishop enter "The Zone"—where self awareness is lost, leaving the music to control the proceedings. From the first note they play, on "Israel"—best known as a tune from the Birth Of The Cool (Capitol Records, 1957), one that also served as the opener for pianist Bill Evans' Explorations (Riverside Records, 1961)—the rubato approach keeps things unbalanced. On a blind listen the tune might not be identifiable in the beginning, but at around seven minutes in, the zone shifts and the trio slips into segment of playing the tune straight, serving the ear as an epiphany of sorts.

Galper's previous trio outings on Origin Records were, in large part, presentations of jazz standards and Great American Songbook tunes—music of John Coltrane, Miles Davis, Sonny Rollins, George Gershwin—with some Galper originals thrown into the mix, all done in his distinctive rubato style. The Zone, and Cubist before it, switch the focus to the underappreciated tunesmithing of Jeff Johnson, who has a discography of superb Origin Records recordings under his own name, including Deuce (2012), Tall Stranger (2008), and Near Earth (2004). His music is fluid and free, beautiful and approachable. His "Kiwi" is all jostling and bumping, shot through with gorgeous, laid-back interplay. "Cubist" has a restless, slip-sliding, multi-pronged momentum which leads into a sensuous Johnson-written ballad, "Artist." And "Scene West" sounds like a slinky soundtrack for a noir detective movie.

In a 1992 interview with Jazz Times' David Zynch, Galper said, "As an accompanist for thirty-five years [Chet Baker, Phil Woods, Sam Rivers] it was my responsibility to be professional and flexible. But somewhere in the back of my mind I always wondered, when is the time going to come when I don't have to compromise at all?" That time seems to have begun in earnest in 2007, with Furious Rubato, and it has continued on and achieved near-perfection with The Zone: Live At The Yardbird Suite, in a series of eight albums, over a twelve year period, which—taken as a whole—represent a superb and innovative, career-capping achievement.