BY MARK CORROTO
September 27, 2009
Sign in to view read count 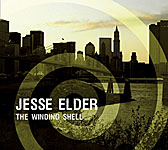 There is always room for a new songsmith in jazz. Pianist/composer Jesse Elder is a prodigious new voice in modern jazz, and his debut recording displays not only his nonpareil composing talents, but those of a very skilled arranger and performer.

The Winding Shell finds him working with kindred spirit drummer Tyshawn Sorey, the much heralded voice of the new Brooklyn sound. These two artists don't confine their music to the jazz vocabulary; they just might be the descendants of Duke Ellington, Muhal Richard Abrams, and Anthony Braxton—three composers mentioned because the music, while experimental and formidable, is quite tuneful and lyrical.

Elder employs some additional heavyweights to play his complex compositions. Tenor Saxophonists Gary Thomas and Chris Cheek are each paired with alto saxophonist Logan Richardson, another talented ally. The tracks twist, and change path and rhythms in some method (not madness) constructed in Elder's mind. While challenging, the ultimate reward is the ability to decipher and enjoy the ride.

The key to Elder's music may just be found in the four tracks tacked on to the end of this disc. Here he plays four-hand piano improvisations with fellow pianist Aya Nishina. The composer takes a back seat to the improviser, but his taste for complexity, tension, and repeating patterns are more associated with modern classical music than jazz. But then, jazz has always borrowed freely from other forms.

The name Jesse Elder is certainly one to remember as the history of jazz continues to be written.