By Mark Sullivan
September 4, 2019
Sign in to view read count 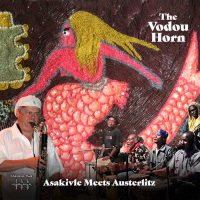 The Vodou Horn album is part of a trilogy called Marasa Twa: Vodou-Jazz-Merengue, exploring the spiritual traditions of Haiti and the Dominican Republic. The focus here is on Haiti, with ethnomusicologist/bass clarinetist Paul Austerlitz combining his playing with Franck Desire's Asakivle drumming and singing group, which plays traditional ritual rhythms in concert settings. After recording live in a Haitian studio, he worked in Brooklyn, NY with recording engineer/bassist Chico Boyer and guitarist Monvelyno Alexis to produce the final product. It is a fusion of traditional Vodou religious songs with jazz and rock.

Austerlitz's electronic bass clarinet makes itself known at the beginning of opener "Gade Yon Rara," a low wah-wah sound over the percussion ensemble. After accompanying the vocal (along with guitar and bass) he contributes a powerful tenor saxophone solo, reminiscent of past jazz/African fusion recordings such as saxophonist John Coltrane's Kulu Sé Mama (Impulse!, 1967) and the collaboration between Moroccan Gnawa musician, singer and guembri player Maleem Mahmoud Ghania and American saxophonist Pharoah Sanders, The Trance Of Seven Colors (Axiom, 1994).

Other tracks feature Asakivle's singing and drumming without augmentation, like "Titindjo," "Mèt mèt mèt" and "Rele Bondye." "Zaka's Wedding" has a gentler drum groove, and integrates the bass clarinet (doubled by bass) into the texture of the song gradually, joined by the guitar. Austerlitz begins "Lamesi" on unaccompanied tenor saxophone, introducing the tune before the singers and drummers join in. The instruments accompany the vocals more closely here, and the saxophone solo feels more integrated with the drums as well. Monvelyno provides a guitar obligato after the sax solo.

"Latibonit yo" has an especially catchy tune, sung in call and response between male and female vocalists. It inspires lyrical saxophone and guitar for the instrumental interlude. "Sè Manbo" is notable for an almost Latin groove. "Rara Jam" presents just what the title promises: hard-blowing tenor saxophone over a driving drum ensemble (plus a bit of overdubbed bass clarinet), and no vocals. "Gade Yon Rara Remix" closes the album with an extended version of the opening track, taken even deeper into Bitches Brew fusion territory.

The Vodou Horn is a remarkable musical fusion. Kudos to Austerlitz and his Brooklyn production partners for crafting a varied, exciting program without ever losing respect for the traditional music foundation—and to Asakivle for their openness to experiment, and a great performance.