BY GLENN ASTARITA
September 4, 2019
Sign in to view read count 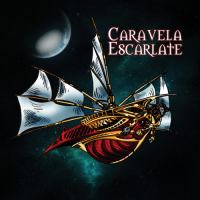 Caravela Escarlate is a rather stunning effort by this Brazilian trio that pays homage to the progressive rock genre's storied past, coupled with a modern sound and distinct modus operandi. Simply stated, this album is a refreshing and highly melodic program that is quite focused and congenial. The artists' cleverness sparkles on motifs where robust church organ phrasings are throttled by synths and hallowed EFX-induced chorale chants. Harmonious riffs appear throughout, featuring Ronaldo Rodrigues' multi-textured, subtly shaded and shifty keyboard work.

Pieces such as "Caravela Escarlate" and "Atmosfera" are designed with Rodrigues' sweeping mellotron voicings, pungent cadences, majestic choruses and memorable hooks amid David Paiva's lyrical wah-wah guitar lines. Sure, there are a few inferences to classic-era Genesis via 1970s style progressions and absorbing choruses, forming celestial auras and mobile walls of sound. But "Gigantes da Destruição" is engineered with a pumping jazz groove led by the keyboardist's feathery electric piano soloing, morphed into variable time signatures and a straight-four jazz rock permutation.

On "Atmosfera" the ensemble takes you to an enchanted land, where radiant synths and sitar sub-motifs transform into a hypnotic and vivid musical environment. Moreover, they shift gears during the jazzy "Gigantes da Destruição," featuring Rodrigues' single note lines, performed on electric piano, feeding a circular theme and an in-your-face jazz fusion vamp.

Other passages contain psychedelics, sober musings and volcanic crescendos, along with thrusting motifs. And add a few somber interludes executed at various cadences topped off with Paiva's hard-hitting bass and guitar parts in concert with Rodrigues' elegant layers and graceful soloing jaunts. Essentially, these young cats burn on all cylinders while traversing a golden path that could conceivably lead to widespread recognition and all the good things that may follow.