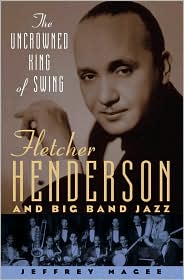 This book first came out in hardback in 2005, but the intervening years have done nothing to diminish its status as the volume to turn to for anyone with an interest in bandleader/pianist Fletcher Henderson, regarded by some as a rather marginal figure in jazz history.

If indeed Henderson's status is marginal, then Jeffrey Magee's book is unlikely to alter it. Magee is not engaged here in an exercise in reclamation. Instead, he sets out a case for Henderson as a key figure in the transition from traditional jazz to swing, via numerous musical examples—only some of which highlight the arrangements that Henderson scored for the immensely popular Benny Goodman band and for which he's perhaps best known.

In that sense at least Henderson's career was somewhat disjointed, for as Magee points out it was Don Redman who was responsible for the arrangements in the Henderson band of 1923-4 in which Louis Armstrong served. Simultaneously, the benefit of hindsight throws light on another twist in Henderson's tale, for the band leader was blues singer Bessie Smith's principal accompanist; in itself this seems anomalous given the fact that as a pianist he was hardly drenched in blues feeling. Add to that the fact that he was far from exceptional as a soloist and a rather clouded picture begins to emerge.

That aspect of Henderson's musical life might have been down to the inherently racist nature of the record business of the time, but that's an issue Magee doesn't care to discuss at length, anymore than the reasons for Henderson's bandleading coming to a halt when it did, in Detroit in 1934. Such a crucial moment in the subject's life is arguably worthy of more in-depth discussion than Magee devotes to it, and the fact that he cites only the non-payment of band members at the time as a reason for it is a little frustrating.

In benefit-of-the-doubt terms, however, it's true to say that Magee didn't set out to write a straight biography of his subject, and in a sense his knowledge of Henderson's music, and the examples he cites of it, do form a reasonably coherent case for Henderson as a musician who moved forwards and who followed his own trajectory.

He's equally on the mark in his discussion of Henderson's early years, particularly in terms of Henderson's family background, in which the mere playing of jazz might have earned only parental disapproval. What he ultimately fails to resolve, however, is Henderson's enigmatic presence. This point is not intended as criticism but simply as an observation of how eruditely Magee presents a portrait of that enigma.