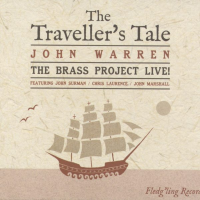 The John Warren /John Surman collaboration The Brass Project(ECM 1478) recorded in 1992, was a belated follow-up to their previous 1971 collaboration Tales Of The Alonquin on Decca's Deram label. As John Kelman's 2005 review of the Vocalion reissue of Tales of the Alonquin avers, this was, in Kelman's words, a "seminal recording."

This archival release of the brass-heavy British ensemble appears on the burgeoning Fledg'ling label (ostensibly a folk label but increasingly reissuing rare British jazz) and was recorded live in June 1993 by John Surman's son Ben. The eight pieces reflect the travelling adventures of John Warren's grandfather Jack Warren who was born on a ship anchored off Papua New Guinea. His early life was characterised by military service. He first joined the British Army serving in India, but when unable to afford to purchase a commission into the officer ranks Jack departed to become a soldier of fortune for a few years. Eventually moving to Montreal, Canada, he married Agnes Barker and subsequently worked for the Canadian railways for 40 years.

The tracks are not connected musically but rather form an impressionistic portrait of some aspects of Jack Warren's colourful life. A plangent opening with "Dawning" cedes to the freewheeling "The Journey Home" with Surman blasting out a tumultuous baritone saxophone solo. Steve Waterman punctures the staccato opening to "Carefree Days" with a lithe trumpet solo whilst Malcolm Griffiths solos rumbustiously on trombone over an obligato bass line on the Asiatic "Hindustan Nights" and Surman is heard again, this time on serpentine bass clarinet.

Chris Laurence gives a virtuoso bass solo on "Elegy" running the gamut of tones rarely heard on the instrument, from percussive harmonics to deep legato notes. Surman's soprano soars over "Lay Of The Land" and by juxtaposition, serves to emphasise the sophisticated and exhilarating ensemble arrangement of the number. Surman leads on bass clarinet in the penultimate number "Resolution" and the set concludes with the lively and funky "New Horizons," Guy Barker providing a soaring trumpet solo and Surman winding-up proceedings with a suitably manic soprano solo, but listen closely to Laurence and Mashall too, fairly tearing the whole thing up.

As with anything connected with John Warren and John Surman this is an excellent example of how a band rich in brass and with no chordal accompaniment can achieve highly impressive results. It's no coincidence that Warren is a fine and imaginative composer and here is assisted by a brilliant ensemble, a reed soloist of international standing and the redoubtable rhythm section of Chris Laurence and John Marshall, a powerhouse team if ever there was one.