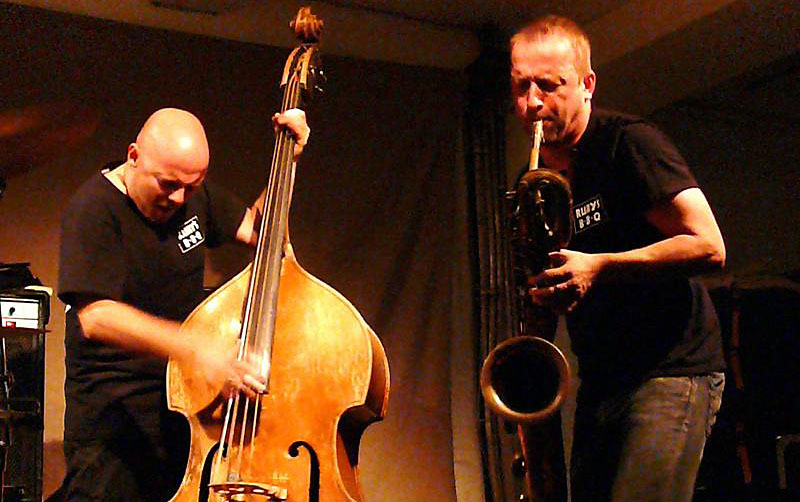 Back in London for the second time in under a year, The Thing held court in north London to a Cafe Oto rammed with a gratifyingly young crowd. When the Scandinavian trio, comprising the Norwegian rhythm pairing of drummer Paal Nilssen-Love and bassist Ingebrigt Håker Flaten, in consort with Swedish saxophonist Mats Gustafsson, started out back in 2000, their book contained mainly tunes by trumpeter Don Cherry (hence the band's name taken from a cut on Cherry's Where Is Brooklyn (Blue Note, 1966)). Since then, however, they have built on their shared love of free musics from America and Europe to develop into a close-knit constellation, happily mashing genre. Such inclusivity was aptly summed up in the roll call for the second set curtain-raiser which encompassed Cherry's "Awake Nu," the traditional spiritual "Balm In Gilead," Sonny Rollins' "The Bridge," and a dirge. In his announcement Gustafsson declared that "everything in between was more or less BBQ." That meaty fare was marinated in a sauce equal parts jazz, improv, blues, gospel and folk spiced with punk rock attitude.

While sometimes shows are completely improvised, tonight The Thing revisited selections from its latest CD Mono (Smalltown Superjazzz, 2011), along with much else, in two ferocious forty plus minute sets. Their physical appearance, huddled in close proximity, sporting matching Ruby's BBQ T-shirts, was reflected in their musical tightness and connectivity. An uncompromising start established the tone for the evening: stratospheric energy levels and head-banging intensity, with a predilection for slipping into pile-driving grooves.

Through no-holds-barred participation in groups like Aaly Trio, Peter Brötzmann's Chicago Tentet, and the Barry Guy New Orchestra, Gustafsson shines brightly in the European free firmament. Incantatory on both tenor and baritone, the saxophonist led the line, exorcising the demons, flinging his horn form side to side and up to the ceiling as he bobbed about the stage, barely able to contain himself.

In Nilssen-Love, The Thing possesses a drummer capable of stunning potency and fierce precision, deployed with great heart and touch, but also reveling in tone color and timbre. Together since 1992, Håker Flaten and Nilssen-Love have become Norway`s heaviest engine room, powering combos including School Days, with reedman Ken Vandermark, saxophonist Frode Gjerstad and cornetist Bobby Bradford's quartet, and Scandinavian super-group Atomic. Håker Flaten needed his bass amped up to compete amid the mayhem, frequently strumming forcefully with two fingers to maintain a pulsating thrum. He played with great physicality, the thwack of the string against the fret-board as important as the actual note selected. At times he formed the still center of the tornado, the stasis around which fizzed the thunderclaps and unearthly shrieks. But there was subtlety too: in quieter moments he manipulated the position of his bass in front of the speaker to create subtly ominous feedback washes, which rumbled beneath the drummer's nagging hi-hat. 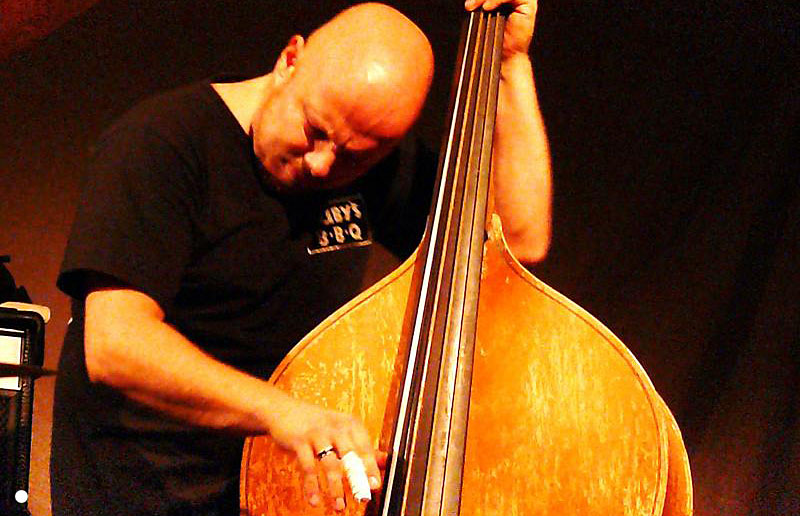 
On occasion it seemed that Gustafsson and Håker Flaten had reversed roles with the drummer; boring down hard on unyielding interlocking riffs, they drove the music forward, while Nilssen-Love fore-grounded his rhythmic explosion with subtle shifts, embellishments and modulations as the creative focal point. Announced by excoriating tenor clarion blasts, Nilssen-Love's "Viking," from the new album, was the most powerful number of the night (and that's saying something), developing into an unstoppable juggernaut with the drummer's limbs a blur as he beat a berserker tattoo. Lest anyone think such excess was all too one dimensional, it should be said that there were also passages of lucid calm and beauty, all the more affecting for the contrast they provided. One unhurried tenor/bass duet morphed into as near as these guys are likely to get to a down home blues. But having heightened tension through repeated phrases, Gustafsson brought about the release with searing cries evoking reed legend Albert Ayler. Later, on baritone, the Swede lit a slow burning fuse—stentorian and insistent. He could be tender too, breathy and heartfelt on a folk melody during the second set opener.

But the closer was another hell-raiser, though deceptively stemming from lower case textures for bowed bass and Gustafsson's percussive keypad pops. Nilssen-Love struck cymbals with his hands and then moved them against the drum heads to attenuate their resonance. Nonetheless together they unerringly escalated to another relentless motif, breaking only for a whirlwind drum solo. Håker Flaten stood poised throughout, ready to hit for the next unison. When it came it introduced a fantastic stop-start passage, variously underpinned by a hi hat continuo or arco screams in the pauses, until all three screeched to a perfectly synchronized halt. The ecstatic applause greeting the conclusion confirmed The Thing as one of the best live bands out there, combining gut-wrenching excitement and visceral power.