Home » Jazz Articles » Joe Henderson: The State Of The Tenor • Live At The Village Vangua...

Joe Henderson: The State Of The Tenor • Live At The Village Vanguard • Volume 2 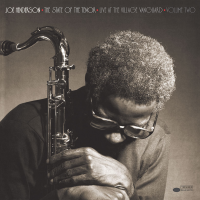 If any jazz performance from the 1980s could be thought of as a landmark statement, Joe Henderson's live State of the Tenor sessions would surely float to the top of the list. Recorded at the Village Vanguard over three nights in November 1985 and originally released on Blue Note Records two years later, State of the Tenor -Live at the Village Vanguard -Volume 2 has now received a high-quality vinyl reissue treatment courtesy of the label's Tone Poet series, curated by producer Joe Harley and re-mastered by Kevin Gray.

In preparing for the original recordings, a conspiracy or sorts between producers Stanley Couch and Michael Cuscuna sought to ensure musical spontaneity by encouraging Henderson to take on tunes that were not part of his normal repertoire; avoiding improvisational clichés was a goal stated on the album cover. To further highlight the tenor saxophone, they chose the challenging piano-less trio format, a demanding circumstance for musicians with no keyboard comping to fill in the gaps. The pressure is to deliver the goods or fall flat. A-listers Al Foster on drums and the evergreen Ron Carter on bass rounded out the lineup.

It gets done all the time, but it's too easy to make comparisons between these recordings and Sonny Rollins' famous trio efforts of the late 1950s. Doing so sells State of the Tenor short; it's a masterful performance that stands on its own in every respect. Henderson's playing shows an extraordinary command of his instrument. He is by turns melodic and fiercely improvisational. He announces the tunes loosely before stretching and pulling them with meaty flights of harmonic overlays. Thelonious Monk's "Boo Boo's Birthday" receives the briefest statement of the melody before being exploded in Henderson's deep imagination, becoming far more profound than the written charts themselves. His tenor sound is often breathy, sometimes even soft in some passages, but always dramatic and fanciful. It is jazz improvisation at the peak of artfulness.

Despite the record's title, Carter's bass is almost as prominent as Henderson's tenor and easily as important. This isn't mere time keeping; Carter—by default -becomes an effective co-leader in an ensemble that lacks any other melodic support. Yes, he helps anchor time with Foster, but the bass also takes on the duties of comping, counterpoint, soloing, and foundation, often at the same time. Carter is a living legend and one wouldn't have to go much further than this record to understand why.

The raison d'etre of any high-quality reissue is to offer some improvement over earlier pressings and the Tone Poet treatment succeeds on this front. As magnificent as these performances are, the original CDs suffered from acoustic bass that was badly recorded: over-boosted, unnatural and electronic. This pressing goes a long way towards ameliorating those sins. The bass is now more naturally integrated into the mix, smoother and less obtrusive; if not the last word in perfectionist acoustic capture, at least it doesn't overpower the recording anymore, allowing the collaborative brilliance of the performance to shine through.

State of the Tenor -Live at the Village Vanguard -Volume II is a first-rate performance that should be on any tenor fan's short list, and the Tone Poet reissue makes admirable, worthwhile improvements in sound quality. This may well be the defining tenor performance of the 1980s and it has never sounded better.