BY EYAL HAREUVENI
July 8, 2009
Sign in to view read count 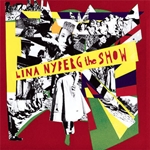 The thirteenth release of Swedish jazz singer and composer Lina Nyberg marks her twentieth anniversary as an artist. This live recording from the small Theater Studio Lederman in Stockholm highlights Nyberg's theatrical flair as a vocalist, a kind of a highly creative staged concert. Nyberg writes in her liner notes that she always envied dancers and actors who can enhance their expressions through lighting and set design, and for this show she managed to enlist a light designer an animation artist, and even convinced her musician colleagues to change their costumes throughout the show.

Even though this audio document cannot deliver all the elements of her unique live show, it still exudes a distinct character. Nyberg has a warm and evocative voice and her wise and bold presentation and playful phrasing are enticing within the song interpretations. Her musicians—pianist Cecilia Persson, who frames this show with three original compositions, bassist Josef Kallerdahl and drummer Peter Danemo, are perfect companions for this theatrical journey.

After a rhythmic instrumental opening Nyberg begins her part with an impressive and assured staging of Peggy Lee's "Where did they go," and follows with her original "Say it isn't so." Both reference the issue of partner desertions, but Nyberg presents the womens' roles as the strongest in these complicated relationships. "Yokohama" and "One little step," two more originals, feature Nyberg as a natural improvising vocalist who can move between different characters in the same song.

Persson's contemplative original, "Interlude: open rein," references fellow countryman Bobo Stenson in its sophisticated integration of bebop, folkloric and modern musical elements. Nyberg changes the mood with the short and playful "I'm a Fish," the only studio song here, and continues with a smoky jazz medley, augmenting the band with vibraphonist Mattias Stahl and bass clarinetist Nils Berg—the only set of songs that sound jazzy in a traditional sense. She concludes this part of the show with the humorous "Sailor song," with Persson adding another swinging interlude before the show ends with a highly creative solo vocal cover of "I've frown accustomed to her face," from the Broadway musical My Fair Lady.