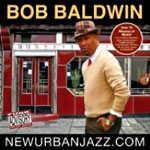 NewUrbanJazz.com isn't just a clever album title, it's a web address and marketing tool where keyboardist Bob Baldwin streams jazz online for listeners looking for their contemporary jazz fix. Baldwin's site joins other Internet sites and satellite radio as replacements for terrestrial radio stations in San Francisco, Chicago, Miami, Philadelphia and other cities that have abandoned the smooth jazz format.

As the smooth jazz format seems to be reliant on 20-year-old Sade songs and waiting for the next Kenny G to come along and revive the flagging format, Baldwin is thinking ahead and looking back to the days when radio was the source for something more adventuresome. More jazz fans are embracing the internet as the medium to bypass radio conglomerates and their timid, tepid programming.

NewUrbanJazz.com is like a Valentine's Day card from Baldwin to the radio days of the late '70s and early '80s. Baldwin fondly looks back at a time when musical genres weren't so stratified, and New York disc jockeys and night clubs set trends instead of following them.

Over 70 minutes in length, Baldwin alternates between bouncy beats ("Jeep Jazz," "She's All That" "It Is What It Is," "Third Wind"), old school soul ("Somebody Else's Guy," "Too Late," "Natural Thing") and neo-hip-hop ("Seems Like One of Those Daze," "Don't Keep Me Waiting").

Hip-hop and jazz sometimes make for uneasy bedfellows, and the album might have benefited from more of the latter and less of the former. Baldwin might have considered a "less is more" approach, as the album does drag a bit toward the end. This might be in part because the younger vocalists/rappers are not yet as accomplished as the old school guest soloists, which include Jocelyn Brown, Phil Perry, and Freddie Jackson.

Baldwin gets major mileage from a trio of guest saxophonists—(Najee, Marion Meadows and Joey Sommerville)—and a full horn section on the tribute, "Joe Zawinul." This production was clearly a labor of love, and Baldwin's own playing on keyboards, piano and other instruments is strong and passionate throughout.

NewUrbanJazz.com is virtually a throwback to rock n' roll concept albums like Pink Floyd's The Wall (Columbia, 1979). The theme here isn't one of alienated youth and jaded rock stars, it's kicking back as a long hot day comes to an end, with the prospect of a chilled-out night full of cool grooves and good times.

Fans of the smooth jazz radio format are waking up to find their favorite stations flipping formats to talk and classic rock like pancakes at IHOP. Going even softer than smooth jazz with the chill format is merely delaying the inevitable end. NewUrbanJazz.com may or may not be The Next Big Thing, but at least Baldwin's approach is proactive, not reactive.

Jeep Jazz; Third Wind; My Cherie Amour; Somebody Else's Guy; Take My Hand; Seems Like One of Those Daze; She's All That!; Too Late; All Nite; It Is What It Is; Natural Thing; Flying High; Joe Zawinul; Don't Keep Me Waiting; New Urban Jazz.