BY JOHN SHARPE
November 4, 2014
Sign in to view read count 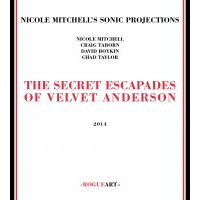 Sonic Projections must be flautist Nicole Mitchell's hardest blowing band. For their second outing after Emerald Hills (Rogue Art, 2010) she draws inspiration from another hard blowing source in Chicago legend Fred Anderson. Not only a mentor to many young musicians in the Windy City, the saxophonist also ran the renowned Velvet Lounge tavern. That required a whole different order of skills to keep it going for so long: negotiation, organization, graft and resourcefulness in the face of gangsters and obdurate City officials. All that is grist to Mitchell's mill as she envisions the late reedman as a comic book superhero. It results in an exhilarating program of multifaceted jazz-based structures which blossom in the hands of her talented ensemble.

As melodic passages rub shoulders with explosive rhythms and tricky unisons, Mitchell contrives a sequence of varied settings for the vibrant personalities in her cast. The CD launch concert proved the high point of the 2014 Vision Festival in NYC, and this disc measures well against that performance. Although Mitchell explores every combination inherent in her foursome, she possesses two especially compelling suits which she fully exploits. Pianist Craig Taborn's spirited interaction drummer Chad Taylor provides the first main axis, while the quicksilver interplay between the leader and longtime colleague tenor saxophonist David Boykin furnishes the other.

Mitchell remains an astonishing flautist. No-one else can match her broad vibrato shrieks, restrained multiphonics, and the sensual flute voice intergrade of sighs and murmurs showcased on "Scaling the Underground." Boykin pairs a dark burnished tone and thick flowing legato with a vulnerable wavering upper register. He tends to be understated, insistently worrying phrases in the bottom end, punctuating them with overblown cries. On "The Labyrinth of Capture" his woozy tenor joins with bleats and mutters, probing the interstices between notes. His squeals and plosives ramp up the intensity. Together they form an attractive blend of earthy tenor and ethereal flute, which can be best appreciated not only on the brief but mysterious "Discovery of the Jewel" but also in the first section of "For the Cause."

Since the unit's debut Taborn has been elevated into the first rank courtesy of his acclaimed solo (Avenging Angel, 2011) and trio (Chants, 2013) discs on ECM establishing him as much more than just a superlative sideman. He is integral to the group sound. His left hand is so strong that a bassist is never missed, allowing him to hold down vamps while supplementing them with sparklingly inventive excursions with his right. At times, like the supercharged ostinato that opens "Bright City," it is a surprise to realize that it is only him and Taylor whipping up such a storm. Taylor can do it all. Although never flashy (the nearest he gets to a solo is at the end of "The Heroic Rescue") he exudes rhythmic ingenuity, able to keep the grooves fresh while at the same time maintaining an intricate commentary.

Mitchell jams so much excitement into the 70 minutes duration that it defies description. Suffice to say that there won't be many better than this come the year end.

Bright City; Secret Assignment; Discovery of the Jewel; For the Cause; Scaling the Underground; Anderson's Plan; Running the Rooftops; The Labyrinth of Capture; The Heroic Rescue.