BY JACK BOWERS
September 1, 2001
Sign in to view read count 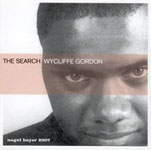 Trombonist Wycliffe Gordon, who has been honing his chops of late with the Lincoln Center Jazz Orchestra, puts them to exceedingly good use on his second impressive album in a row for Germany’s splendid Nagel–Heyer label. Gordon has to be on his toes, as he’s pushed hard on a number of selections by his invited guests, several of whom are (or were) colleagues in the LCJO — saxophonists Victor Goines, Ted Nash and Walter Blanding Jr.; trumpeter Marcus Printup, trombonist Ron Westray, pianist Eric Reed, bassist Rodney Whitaker and drummer Herlin Riley (who shares playing time with Winard Harper). If he’s at all bothered by the competition Gordon doesn’t show it, giving almost everyone on the team more than one chance to run with the ball (there are no fumbles). But the playbook is Gordon’s, and it includes five of his well–drawn compositions along with two each by Thelonious Monk and Hoagy Carmichael, two traditional melodies and Cole Porter’s “What Is This Thing Called Love.” Gordon salutes his native state with Carmichael’s memorable “Georgia on My Mind” and a nimble–footed reading of “Sweet Georgia Brown” on which he uses growls, slurs, multiphonics, double– and triple–tonguing and nearly every other trick of the trombonist’s trade, making the horn sound on entry almost like an Australian didgeridoo (which he actually plays quite well on “The Search,” part 1). He uses a mute to “talk” his way eloquently through “Blues for Deac’n Cone,” and plays tuba (with Westray and Delfeayo Marsalis on trombone) on “Sign Me Up” whose straight–from–the–pulpit accents are well–expressed by Reid, Whitaker and Riley. Gordon has front–line company on nine numbers, performing with the rhythm section alone on “Stardust,” Monk’s “Rhythm–a–Ning” and the two “Georgia” dedications. Nash plays alto on “Cheeky,” “Touch It Lightly” and “Deac’n Cone,” flute on “The Search,” and there are five–’bone choirs on that selection and “Frantic Flight” whose bare runway serves as a springboard for heated solos by Westray, Jen Krupa, Dave Gibson, Marsalis and Gordon. Printup, Blandings and Goines help upgrade the enterprise, as do Reid, Whitaker, Harper and Riley. But this is Gordon’s game, and he plays his cards extremely well, leading with his strength and raising the ante with clever touches that keep the game interesting and entertaining. Looks like he’s holding another winning hand.