Home » Jazz Articles » Stephane Belmondo: The Same As It Never Was Before

Stephane Belmondo: The Same As It Never Was Before 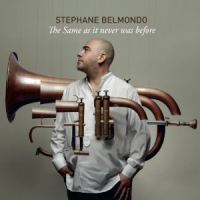 It is all a matter of the right tone for French trumpeter Stephane Belmondo. On Same As It Never Was Before, it is a matter of getting his lips in the right position—singular embouchure—then grabbing the air from his lungs and blowing it out in hot wild gusts through the horn. But it is also more than that. Belmondo is special: the volume of air he grabs will tell if the notes are fat or thin, rounded or sharp. He can sustain notes for a very long time and does not like the idle chatter of some horn players. His circumspect manner demands that he plays with brevity, making each note in the short lines count, as if it were the last he would ever play. Belmondo has a deep regard for space. Like Clarence Shaw, who once played with the great Charles Mingus, Belmondo does not clutter space with notes. He occupies it with respect for the volume or air it allows him to expel any given time. And so he plays only what is necessary; also never soloing for too long—he does not need to. Everything that matters is sung as it should be, like a jazz aria.

The title of the album is a dead giveaway. The fine liner notes need not be read to know that Belmondo is an astute student of musical history. He knows his Louis Armstrong and his Jabbo Smith; he knows his Dizzy Gillespie and his Miles Davis; and, yes, he is fluent in Fats Navarro, Clifford Brown and Freddie Hubbard. Above all, he is most assured in his Stephane Belmondo. His voice is singular and even when his lines are long he is never linear, but always modulating; looping the lines rising in volume and rich in tone only to fall away like a dying heartbeat as he downshifts toward the B-side of a song. The beautifully written "Light Upon Rita" is a fine example of his playing, like a voluminous river that runs in a trickle; then in a flood, but also waltzes every step of the way. It is a treat to hear how pianist Kirk Lightsey picks up on this and in his own way, takes the trip with Belmondo halfway. Here, Billy Hart gives notice of his sensitivity and melodicism as well, while Sylvain Romano provides proof that he is one of the most mature bassists ever to pick up the bow.

Lightsey, who once played with Dexter Gordon, gives it his all to show how much he is in the tradition, and literally eggs Belmondo on in a particularly aching version of "Everything Happens To Me" that might just as well be called definitive. Pace and tempo is everything—another special skill of both Lightsey and Belmondo, and nowhere is it better expressed on this fine chart. On "Godspeed" the group is on top of its game. What a fine album from a fine group of musicians.

So We Are; You And I; Habiba (Intro); Habiba; Free For Three; Light Upon Rita; Everything Happens To Me; Godspeed; United; Haunting By Now.

Title: The Same As It Never Was Before | Year Released: 2012 | Record Label: Sunnyside Records