The Rhythm Future Quartet at The Evening Muse 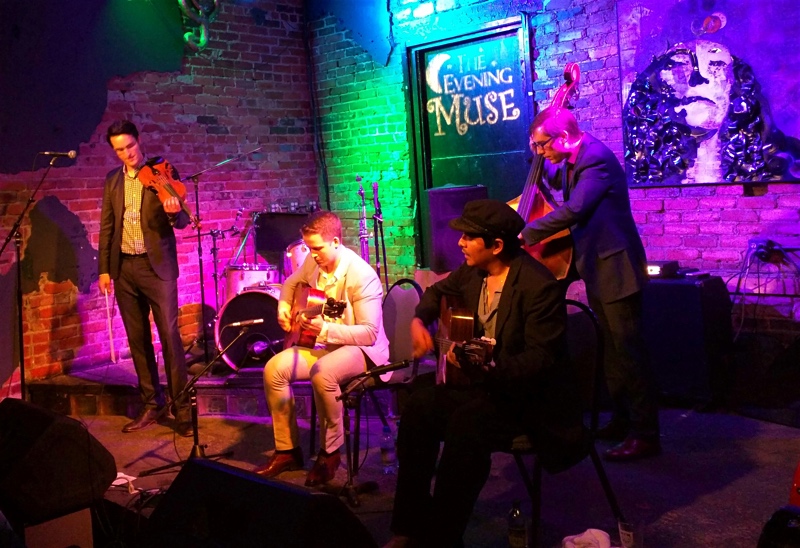 The Rhythm Future Quartet plays Gypsy jazz with one eye towards the past and the other towards the present. They've got the style, they've got the chops, and they're not afraid to try new things. As one of a series of shows billed as album release parties for their second release Travels, much of the program was taken from there. Bassist Greg Loughman's "Iberian Sunrise" opened the show, as it does on the album. It makes a great introduction to the band, with its sly, gentle opening that gradually builds to a lightening-fast bridge. They sound good playing slow, and they're absolutely jaw-dropping when playing fast. Guitarist Olli Soikkeli is not called "the Finnish Boy Wonder" for nothing, and violinist Jason Anick is his equal in speed, articulation, and soul. After another fast number Anick introduced the band (with Soikkeli returning the favor by introducing Anick). It wasn't mentioned from the stage, but 2nd guitarist Ivan Pena was filling in for regular 2nd guitarist Max O'Rourke—and indeed there was nothing about the sound or the group interaction that made the substitution apparent. The rhythm guitar part is really the rhythmic engine in this music, and Peña performed that role to perfection, as well as doing a bit of lead playing.

After Soikkeli's "For Paulus" the band pulled out their first surprise of the night, their cover of John Lennon's Beatles tune "Come Together." Anick said it needed no introduction, and he was right. Driven by Loughman's bass, the arrangement made the song sound like it was written for this instrumentation. The crowd loved it as much as the band seemed to enjoy playing it. Then the international flavor implied by the title "Travels" came to the fore with Anick's "Vessela," an exciting exploration of Balkan rhythms and harmonies. After another really fast number Anick joked that it might have been the last song the group would ever play. But of course they came right back with a version of "On The Sunny Side Of The Street" which featured solos from the 2nd guitar and the bass. They wrapped up the first set with "Bushwick Stomp" (in honor of Finnish guitarist Soikkeli's move to his present Brooklyn home). Anick was proud to announce that the Facebook video of the song has topped a million views.

The second set delivered lots of traditional Gypsy jazz energy, like the cover of "Don't Tell Me." But there was also a guitar duet, a medley of "Moscow Windows/La Gitane" (which is included on the group's 2013 debut album). How did a violinist from Massachusetts and a Finnish guitarist meet? Anick explained that they had both been instructors at the "Django in June" music camp, and when Soikkeli moved to the United States they jumped at the chance to work together. Then they played a remarkable mashup, an arrangement that combined the Gershwin standard "Summertime" with Michael Jackson's "Billie Jean" (another selection from the debut album). It's amazing how well the tunes worked together: an absolute hoot. It would have been fascinating to witness the slow burn from the audience as they recognized the two songs if they had not been announced beforehand. The show ended as the album does, with more straight-ahead Gypsy jazz, a cover of Bireli Lagrene's "Made In France."

This group has really got something: a sound and presentation capable of appealing to an audience far beyond Gypsy jazz aficionados (although anyone who is not a purist will find plenty to love there as well). They have something to offer to fans of jazz and swing music generally, and to fans of virtuosic acoustic music. Maybe not "something for everybody," but as close as an instrumental group gets.