Ivo Perelman: The Purity of Desire 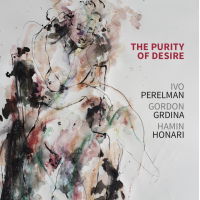 Tenor saxophonist Ivo Perelman prolifically documents his work, his discography growing almost by the week. But he finds new things to say and new ways of saying them, even with his most regular collaborators. Witness the stream of superlative recordings he has made with pianist Matthew Shipp. But, at the same time, the New York-based Brazilian also seeks out new situations; he unveils an intriguing setting for his songlike fragments and searing wails with the oud of Gordon Grdina and hand percussion of Hamin Honari on the eight collective inventions which make up The Purity Of Desire.

Canadian jazz guitarist Grdina fell in love with the sound of the oud, a middle Eastern forerunner of the lute, and began playing the instrument in his early twenties. His study of Persian classical music brought him into contact with Honari, who emigrated to Canada from Iran in 1985, and appears alongside him in various groups which mix jazz, improvisation and traditional modes. Together they create a distinctive accompaniment for Perelman.

Drawing on the scales and rhythms of Arabic and Sephardic musics, they find an affinity with the saxophonist's love of Jewish synagogue chanting. Earlier in his career that affection found an outlet on En Adir (Music & Arts,1997), an album which used traditional Jewish tunes as the basis for exploration (and with Marilyn Crispell, Gerry Hemingway and William Parker on board, they ranged far). With such influences in play, Perelman's obsessively reworked phrases and vocalized leaps into the stratosphere pack a visceral emotional kick.

The title cut establishes the template. It starts with a flurry of hand drums from which emerges a shuffling beat. In response, Perelman layers a repeating melody, impassioned and insistent, which brings klezmer to mind. Grdina picks out complimentary patterns which drive the reedman to ascend into his trademark falsetto in incantatory fervor.

While varying degrees of improvisatory digression mean it is an oversimplification to say that much of the session comprises variations on that model, it does denote a recurring, but winning, formula. The pleasure comes in the richness of the Honari's counter-rhythms, the way Grdina shifts from reflective to dervish and, of course, Perelman's lustrous tone, nuanced upper register and melismatic beseeching cries.

Purity of Desire; Bridge to the Soul; Love is a Stranger; This Longing; A Garden Beyond Paradise; Music of a Distant Drum; The Joy That Wounds; Light upon Light