BY HRAYR ATTARIAN
April 8, 2021
Sign in to view read count 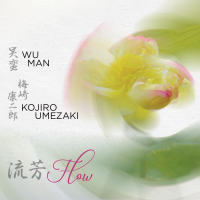 The various East Asian musical heritages share some similarities yet are distinct in many important aspects. Japanese-born, USA-based composer & shakuhachi (bamboo flute) player Kojiro Umezaki joins award-winning Chinese pipa (lute) virtuoso Wu Man for a set of enchanting solos and duets on the intimate Flow. Together they highlight those shared elements and beautifully contrast the differences.

The album is made up of five impressionistic movements, four of which are named after the seasons of the year. Man opens "Winter (Night Thoughts II) with a melancholic and sublime melange of reverberating strings and silent pauses. The piece is based on ancient notations discovered in a Buddhist Cave. Her meandering melody is like a shimmering, flickering flame in a dark and cold night. At moments, the music is fiery but mostly sublimely contemplative.

"Spring" has both musicians weaving supple lines around each other conjuring images of a cool, foggy morning. Umezaki blows mellifluous phrases like a fragrant breeze while Man sprinkles the main theme with single plucked notes. Midway through, the Zen serenity gives way to a playful and passionate dialogue, only to fade into an introspective serenade. Man's strings mimic a rain shower before a period of quietude concludes the performance.

Umezaki takes "Bamboo" unaccompanied, and his yearning flute resonates with wistful lyricism. Alternating long undulating lines with silent pauses and with hints of angularity, he creates dramatic atmosphere and a vibrant pastoral tone poem. The tune brims with mysticism and spirituality

Individually, both Man and Umezak, have made indelible marks on a wide range of genres. Together they are members of cellist Yo-Yo Ma's Silkroad Ensemble, a collective which specializes in melding traditions from around the world into a mesmerizing sonic quilt. Hence, this uniquely captivating release is a natural extension of their past work both within Silkroad and without it. It is also a delightful introduction to harmonies and scales infrequently heard in western cultures.