BY JOHN EYLES
November 2, 2006
Sign in to view read count 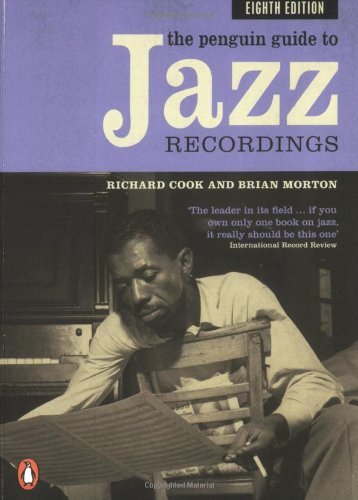 Now in its eighth edition, fourteen years since it first appeared, Richard Cook and Brian Morton's The Penguin Guide To Jazz Recordings is not going to spring any great surprises on us. It doesn't need to; it has a tried and trusted formula that works. Its blend of facts and opinion is just about perfect, making it an invaluable reference work without the dry scholarly tone that some reference works can have. And the re-introduction of an index—after its absence in the last edition—greatly adds to its use as a work of reference.

It's rare to dip into this guide without coming away better informed and wishing to take issue with one or more of the authors' judgements. (Why does Keith Rowe no longer merit an entry? Why has Steve Lacy's wonderful Spirit Of Mingus been demoted from four to three stars?). But the ultimate test of a work like this is how often it is used; my copies of the previous seven editions—each tatty, well-thumbed, dog-eared and annotated—bear witness to its success over those fourteen years.

Every two years, the arrival of a new edition is the cue for jazz fans across the globe to enter a prolonged period of social hibernation while they identify and then digest Cook and Morton's additions and revisions. The scale of these can be breathtaking; in the two years since the appearance of the seventh edition, the dynamic duo have added assessments of some two thousand new CDs—that's an average of three per day. They have also added listings of over four hundred new artists.

At such a rate of production, it's not surprising that Cook and Morton occasionally don't get it spot on first time—and to their great credit, the pair are never dogmatic, and have always been willing to return to past assessments and revise them when they feel it necessary. They also revise entries in the light of an artist's new releases and/or demise.

The book is of equal value to both experienced jazz listeners and novices. The long-established system of the authors awarding graphically-flagged crowns to albums that are their personal favourites provides a quick, easy guide to beginners; while for experienced listeners, the movement of albums in and out of the crowns, edition by edition, is more fascinating than following the stock exchange.

Having said that, the choices for both categories are hard to argue with. Taken together, they provide a great list for listeners old or new. I'm grateful to have been steered towards some of the past crowns I'd never have stumbled upon by chance. And it is great to see Alexander von Schlippenbach's (newly crowned) Monk's Casino get due recognition.

Yes, Cook and Morton may sometimes seem like the jazz equivalent of the Stasi—rewriting history and air-brushing out those who have fallen from grace—but if they didn't exist, we'd have to invent them. Long may they thrive.