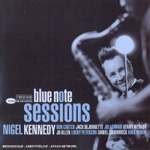 I confess I wasn't expecting to enjoy this album. Here in his native Britain, violinist Nigel Kennedy is regarded by some as a figure of fun, a player who made much of his fortune with Vivaldi's evergreen Four Seasons, still a nice little earner, but one who has energetically promoted himself as the rebellious bad boy of classical music. He is to straight music something of what Madonna's husband, fellow mockney Guy Ritchie, is to filmmaking.

But Blue Note Sessions won me over within a few minutes. It's a pretty and thoughtful album, and, while it won't change anybody's world (except perhaps Kennedy's), it makes for quietly enjoyable early morning or late night listening. Only a fully paid-up churl would deny its easy swinging, lyrical charm.

Kennedy doesn't emerge as the world's most adventurous improviser, but he's a melodic and relaxed one with a natural grasp of jazz rhythm. He also contributes the album's violin-and-saxophones theme arrangements and two ballad originals, "Maybe In Your Dreams" and the exquisite "Stranger In A Strange Land." The rest of the material includes familiar and not-so-familiar tunes by Kenny Burrell, Duke Pearson, Horace Silver, Lonnie Liston Smith, Butch Cornell and Ivory Joe Hunter.

Of course, Kennedy gets a support structure to die for, a band which is locked into the limber groove throughout. Saxophonists Joe Lovano and JD Allen, bassist Ron Carter, drummer Jack DeJohnette and organist Lucky Peterson are perfectly suited to the occasion. It's to Kennedy's credit that he isn't overwhelmed by such company, and to the band's credit that it provides a credible comfort zone for him to shine in.

After nine richly mellifluous tracks, Kennedy presents an unexpectedly funky side to his playing on Hunter's blues "I Almost Lost My Mind." There's no denying the guy has soul. I'll be playing this album again, without a doubt.

Midnight Blue; Sudel; Maybe In Your Dreams; Sunshine Alley; Nearly; Expansions; Stranger In A Strange Land; Song For My Father; After The Rain; I Almost Lost My Mind; Song For World Forgiveness.