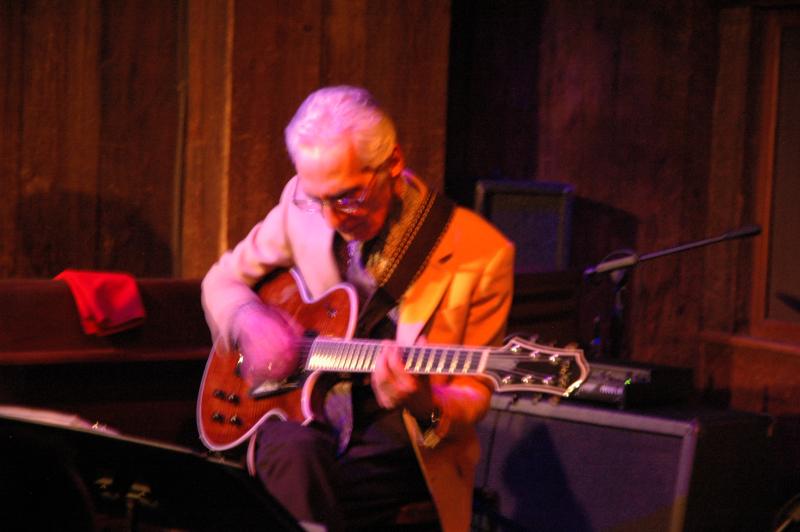 Legendary guitarist Pat Martino has traversed several musical landscapes in a career spanning more than five decades. He went from being a mind-blowing newcomer in the Harlem and soul blues jazz scene in the sixties to a major contributor to hard bop and fusion music in the seventies. Then, in 1980, brain surgery for an arteriovenous malformation (AVM) left him with profound memory loss, and only with diligent effort did he become able to play again. After being initially hesitant about performing, he went out into the clubs and made a few recordings. At a certain point, Martino regained his top form and brought his playing into the New Milennium with the groundbreaking album, Think Tank (Blue Note, 2004). Today he is performing everywhere on the planet, and his riveting style is as exciting as ever.

Once or twice a year, locals in his home town of Philadelphia, where he has a cadre of loyal followers, get to hear him at Chris' Jazz Café in the downtown area. They jam into the club to hear their friend Pat (who genuinely enjoys his fan base) charge up the place with his music, and he never disappoints. This reviewer shows up on these occasions with the same enthusiasm but also the specific intent to find out what Martino is up to musically Here and Now (the title of his recently published autobiography, Backbeat, 2011). On this occasion, what's new was obvious: the addition of horns to his well-honed Pat Martino Trio featuring organist Pat Bianchi and drummer Carmen Intorre. Standing to stage left of the trio were tenor saxophonist Adam Niewood and trumpeter Alex Norris. Why were they not center stage with Martino? There was something striking about this positioning of the instruments. What were they going to do?

The answer became clear as soon as they launched into Martino's original, "Draw Me Down," from his album Night Wings (Muse, 1996). It was as if Martino were trying to recapture some of the soulful "Gator Tail" feeling from his days with Willis "Gator" Jackson, which had the same quintet instrumentation. Niewood and Norris blew out the melody a la Jackson, and the music shifted over to the organ trio, and then back to the horns. The arrangement allowed Martino to keep the integrity of his trio, while adding the horn sonorities, almost a stereophonic effect. It worked well, and the almost nostalgic Harlem days approach carried through the next two tunes.

Martino's own "Inside Out" and "Dead Center" were suitable upbeat follow-ups, and gave all the musicians opportunities for solos where they could flash their goods. Norris pounded out phrases in a way that had the punch of swing era trumpet combined with the sophistication of bebop and hard bop. He clearly emphasized the components of the mainstream, while Niewood was able to provide more subtle inflections and nuances. Bianchi was stronger than ever, and it didn't do any harm that he played the Hammond B-3 rather than the more modest keyboards he sometimes uses on gigs. Martino -what can you say? -was Martino!

For a ballad, the trio minus the horns surprisingly chose Charles Mingus' composition, "Duke Ellington's Sound of Love" instead of one of the Songbook tunes. As always, it was beautifully executed and incorporated Mingus' hot yet cool inflections with finesse. Martino is one of the best and insufficiently recognized ballad players in all of jazz. Here, as always, he captured the blues essence of the jazz ballad, and his full sound was lyrical and expressive.

The full quintet concluded the set with Martino's "The Great Stream," a great tune from the 1970s that was part of Martino's transition from soul blues to hard bop and the mainstream. The group fully developed the improvisational implications of the tune, with classy solos by everyone, followed by trading eights. It was like going from Harlem to Greenwich Village on the "A Train." Niewood's solo was especially inventive and modernist, adding a special flavor to the group.

The core trio (Martino, Bianchi, Intorre) has been playing gigs and on tour for a few years now, and they have developed into a crack unit that performed at their best on this evening. Bianchi, a rare case of a modest and musically thoughtful organist, literally let all the stops out like Jack McDuff. Intorre provided a perfect and driving rhythmic foil for Martino. Niewood and Norris added an element of versatility and "fat" horn sounds to the mix, giving a feeling of dropping into a jam session. They have worked with Martino for only a short time, and with more gigs with him under their belt, they may become more fully integrated with the trio unit and join them "center stage." It will be very interesting to see how the quintet evolves. Will they continue on the track of a trio with added horns, or become a fully integrated ensemble? Fans who follow them may obtain a genuine and not always obvious sense of how a jazz group evolves over time.

Set List: (All compositions by Martino except where noted.) Draw Me Down; Inside Out; Dead Center; Duke Ellington's Sound of Love (Charles Mingus); The Great Stream.