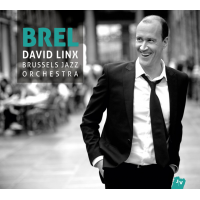 While David Linx's name may not be writ large here in the States, the fifty-one year-old singer, composer and multi-instrumentalist is a mega-star in his native Belgium, and in 2005 was named Best Jazz Musician in Europe, which covers a whole lot of territory. On Brel, Linx sings music composed by his Belgian forerunner, the late and legendary Jacques Brel, accompanied by the world-class Brussels Jazz Orchestra (whose personnel are not listed on the bare-bones promotional copy save for saxophonist / music director Frank Vaganee).

The music is for the most part cerebral and debonair, lending itself quite well to a jazz milieu (one of the few French words salvaged from high school). As for the lyrics, they are generally sung in the aforementioned Gallic tongue; in other words, incomprehensible. Linx employs the universal jazz "language"—scat—on the flag-waving "Mathilde" and sings in English on "Vesoul -Amsterdam" and "Isabelle," reminding the listener why he doesn't choose to do so often. Elsewhere, like most other French singers, he sounds exceedingly French (or Belgian). Those who've heard Brel, Maurice Chevalier, Georges Guetary, Charles Aznavour, Sacha Distel and other standard-bearers should grasp the allusion.

The session opens quietly with the melodious "Quand on n'a Que L'Amour" and ends on a dynamic note with "La Valse a Mille Temps," which must translate into "waltz, fast and loud." Even though the lyrics (in most cases) are foreign, there's no doubt that Linx sings them well, with excellent diction and phrasing. As for the BJO, it plays its ancillary role to perfection, giving Linx a hermetic framework from which to operate while weighing in with a number of brief yet persuasive solos along the way. In spite of his prominence, there haven't been a great number of tributes to Jacques Brel and his music, which makes this one by David Linx and the BJO that much more enticing.