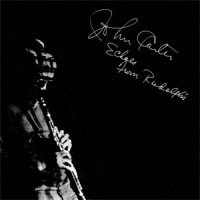 Echoes From Rudolph's captures a pivotal moment in clarinetist John Carter's career, when he abandoned his saxophones and began specializing entirely on the woodwind wand. Reissued from 1977, the NoBusiness imprint has supplemented the original LP with a contemporaneous radio broadcast by the same unit. While there is some noise on the first disc as it was transferred from a test pressing, it's not enough to present a problem. The radio broadcast is slightly murkier, with Carter himself suffering the most. Nonetheless it's clear from the first notes that this is a working group. Once the heads have been navigated, everyone plays an equal role.

Carter possesses a rich full sound on clarinet, but also skillfully exploits the altissimo register, skirling up into bat frequency territory, though he also takes pleasure in scratchy timbral adventure. His son Stanley holds down the bass chair, utilizing amplified acoustic which loses some of its natural resonance but benefits from enhanced percussive flavor. He favors a busy sound whether in rippling pizzicato, plucked harmonics, or buzzing arco. On drums William Jeffrey proves an accomplished practitioner -an inventive purveyor of pulse who rarely settles into time.

Carter introduces proceedings on the title track with a bubbling solo clarinet as if heralding a new dawn, before choppy bass and drums connect to create a garrulous conversational vibe which exemplifies the collective ethos of the band. On the elegiac, restrained "To A Fallen Poppy," vocalist Melba Joyce bewitchingly sings the lyric with delicate murmuring support from the leader's clarinet. Carter makes a bold statement of intent on the unaccompanied "Angles" starting with a clarion call spiraling into the thinnest of whistles, before incorporating multiphonics at a fast simmer, fuelled by circular breathing.

On "Amin" in his last recorded outing on soprano saxophone, Carter's rollercoaster mewling explores comparable territory, joined by fluid bass and drums. With its concentration on the stratosphere and slaloming bass, the churning "The Last Sunday" propagates a nervy restless feel that suggests more to come. While that wasn't the case first time around, now there is more contained in the radio broadcast which rounds out this package. The second CD holds two long selections, each comprising several pieces which add further evidence of instrumental prowess and additional Carter compositions, including extended versions of three cuts from the original LP. Among the notable passages is a speech like shout out from Carter's clarinet in "Unidentified Title 1," answered in similar style by his son's slurred bass notes. A lovely touch which epitomizes the intimate dialogue which permeates this set.