By PIERRE GIROUX
January 13, 2021
Sign in to view read count 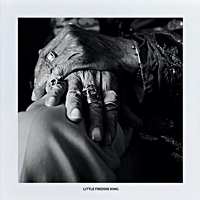 Newvelle Records, which was established in 2015, believes that in this digital age there is an opportunity to build a new model for creating and distributing music. Each year, Newvelle releases a series of six albums, exclusively on vinyl, that pairs musicians with celebrated artists, writers and poets. The New Orleans Collection contains four single sleeve 180 gram clear vinyl albums, each of which was recorded in New Orleans between January and March 2020 at Esplanade Studios, a former church built in the heart of Treme.

The second album in this series is by Little Freddie King, a purveyor of the blues who is a cherished guitarist, singer and songwriter in his hometown of New Orleans, although his singing and playing roots are in the Mississippi Delta.

The blues suggests different things to different people. While it experienced constant change over the years, it persists by providing inspiration to singers and musicians. As King states in the liner notes "to understand what they don't understand, they'd have to go through it. If they had gone through it, it'd be there."

Side A opens with an instrumental, "Bywater Crawl," which is offered in a repetitive minimalist style at a slow tempo (a crawl) lead by King's guitar playing. Since he doesn't use a pick but plays using his thumb, he has a fuller sound. Many of the tracks in this session were written by King alone, others with "Wacko" Wade Wright. So regardless of the composition, whether " Pocket Full Of Money," "Going Up The Mountain" or "I Used To Be Down," they each tell one own's story of a life experience filled with misfortune, heartlessness, love and redemption. These are ingredients in which the blues thrives and survives.

In his 80th year, King may well be one of the final living connections to that cohort of blues musicians who boxcared to New Orleans and whose musical upbringing and style informed such compositions as "Bus Station" and "Standing At Your Door." The back story tied to King's composition "Mean Little Woman" is worth a brief telling. King married a woman named Amy Green but the relationship was volatile, fuelled by jealousy and drinking. In 1986, on his way home from a night of carousing, King encountered his wife outside a club and a scuffle occurred. King was stabbed in the shoulder, his wife ran home and when King entered the house he was shot five times by his wife. He survived, his wife was never prosecuted and a song was born.

Side A: Bywater Crawl; Pocket Full Of Money; Going Up The Mountain; Bad News; I Used To Be Down; Coming Home To Jesus Side B: Bus Station; Standing At Your Door; Can't Do Nothing Baby; Mean Little Woman; Going Upstairs ( Live At BJ's Lounge)