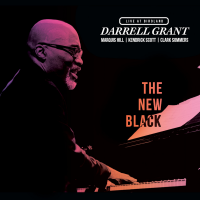 Pianist Darrell Grant's debut album Black Art (Criss Cross) was released in 1994, and became acclaimed as one of the definitive statements of New York jazz in the 1990s. It featured bassist Christian McBride, drummer Brian Blade, and the late, great Wallace Roney on trumpet—all of whom would go on to make major statements of their own in the music. In 2019, some twenty five years later, Grant had the opportunity to revisit the album repertoire at Birdland, convening bassist Clark Sommers, drummer Kendrick Scott and trumpeter Marquis Hill.

The only recording made that evening came via the digital recorder Sommers employed to capture the sound for his own personal reference. There was no recognition by the musicians that a recording was being made. In fact, until Grant listened to Sommers' files via Dropbox, there was never any intention to release the recording. As the listener can plainly hear, there is no close miking for recording purposes. Yet despite the limitations of the recording quality, Grant felt the feeling and energy of the music "leaped off the recording," and deserved to be heard. He felt that like the original recording of Black Art, the music celebrated "the joy and unfettered possibility of Black artistic expression." The result is The New Black (Lair Hill, 2022).

Grant was undeniably correct in his assertion, as the music portrayed on the recording is thrilling and documents the singular expression of joy these four musicians provide with power and agility. The vibe of the club is heard as well, with the audience seemingly riding on every note with anticipation and jubilation.

Grant rearranged the pieces to reflect the twenty five years of creativity he has experienced since the original recording. His insights allowed the musicians to break open the pieces, and add their individual prose to the collective mind of the music, and the quartet itself. "Tilmon Tones" for example, features the madly swinging connection between Sommers and Scott, honed through recordings and tours together in Kurt Elling's band. "The New Black" portrays Hill as the perfect horn player for this music, picking up and expanding on Roney's original interpretation. Hill's work throughout the recording is honest, adventurous and expressive.

Grant states that Black Art was the "affirmation of the impact Black musical voices had in shaping my own identity." The New Black carries that concept forward with the wisdom of a quarter century of music-making added to the formula. In its original form,"For Heaven's Sake" was offered as a trumpet-piano duo on Black Art, but expands to a full band piece on the new recording. The rich melody and sublime harmony is given extra flight with a closing statement vamp that allows Hill to have the space to take the piece to the next level of expressionism. Grant's solo features gorgeous voicings, and dynamic, melodic runs that only begin to express the diverse landscape of his playing.

Since his move to the Pacific Northwest, the now Portland-based Grant has immersed himself in that region's vibrant jazz scene as a player, composer and educator. His genius is well known in that region, and to some degree has been isolated from the center of the jazz universe in New York City. This one New York evening in 2019 is, to some degree, a love letter to Gotham, written on one of its most legendary stages. It is a valid exploration into the soul of a jazz visionary who is somewhat underappreciated on an international scale. While the recording quality could certainly be better, it is good enough to hear, and more importantly, to feel the energy, wisdom and artistic movement of the music. The club chatter in the background gives the recording a familiar, organic ambience any true jazz fan can relate to. Most importantly, it is a definitive statement to the jazz world of what is common knowledge in the Pacific Northwest—that Darrell Grant is a jazz artist residing in the top tier of modern jazz protagonists.