I was quite fortunate to see and hear this powerful blues rock influenced band on January 27th in a pre tour show as part of the NAMM Show festivities at The Baked Potato in North Hollywood.

Guitarist extraordinaire Landau was accompanied by bassist Jimmy Johnson, singer/guitarist David Frazee, and drummer Alan Hertz for this show. Landau and Frazee are joined by bassist Andy Hess and drummer Ian Thomas for the European tour.

The band was performing the first of four shows in two nights. They were in it from the beginning with a burning version of "Can't Buy My Way Home." The fiery ninety- minute set was mostly comprised of creative compositions from previous stellar Landau band entities such as Burning Water, Renegade Creation, The Raging Honkies, and The Michael Landau Group.

Unheralded singer Frazee lent a noteworthy substance to the sound. He was particularly effective and spirited in the bluesy material. He reached inside for a lot of soul on "A Peaceful Ride" and "Worried Life Blues."

Talented veteran bassist Johnson has been a Landau band mate for many years. They have been part of James Taylor's touring band for over 25 years. They have also, for the past few years, recorded and toured as part of the Steve Gadd Band.

Johnson told me after the show that, "He (Hertz) and I had never played together before." I had wondered if that might be the case, though you certainly couldn't hear that in their performance. Johnson intimated that with a smile and nod of approval toward Hertz. Hertz was smooth with brushes and offered tasty fills. Collectively they delivered a tight groove that Landau and Frazee used as a skyrocket platform.

Clearly the leader, the multi talented Landau brought his "A" game and smoked The Baked Potato. There is a reason why he has recorded and/or played with an impressive and lengthy list of artists over the past three decades plus. Because he has done so much session work, Landau has a refinement and diversity in his craft. There are no wasted notes or chords. Everything is played with depth, conviction, and intent.

Sometimes dotting with fusion, Landau blazed through Jimi Hendrix-esque rock and steamed through hard-edged blues that were reminiscent of Freddie King or Stevie Ray Vaughan. His sophistication and skill set, however, bring about a sound and style that is uniquely his. His music is a remarkable combination of heart and passion.

The show closed with "Red Alert," a song mostly identified with Allan Holdsworth and Tony Williams. Played with grit and vigor, it was a most appreciated encore. The Michael Landau Liquid Quartet had now thoroughly cascaded the intimate sixty-seat venue.

In February 2018 the quartet offered up 10 new songs on a release entitled Rock Bottom. 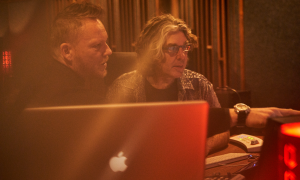