By Nenad Georgievski
February 19, 2018
Sign in to view read count 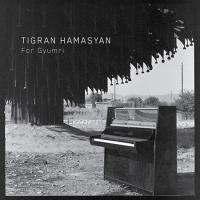 Even on this shorter album, Armenian pianist and composer Tigran Hamasyan displays a tireless ambition with his compositions, performances and eclectic approach. Over the course of his career, this young artist has released a wildly diverse stylistic set of releases that portray his eclectic and sometimes contrasting music tastes. The muse knows no borders or limits for this gifted pianist. While his first releases—starting with World Passion (Nocturne Records, 2006), and New Era (Blu Jazz, 2007)—showcased his considerable talent in jazz, his third and breakthrough album Aratta Rebirth (Plus Loin, 2009) portrayed his taste for composing works of a true fusion nature. It's here that he began fusing his love for jazz with traditional melodies from his native Armenia. Since then his worldview expanded considerably and he has relentlessly followed his muse where the rich and timeless musical heritage of his homeland would serve as constant inspiration for his music, regardless how eclectic and diverse it has become.

Named after the city of his birth, Gyumri in Armenia, For Gyumri follows Hamasayan's 2017 release, Ancient Observer (Nonesuch Records). While primarily focused on the jazz universe, his compositions seamlessly integrate Armenian melodies and traditions with classical, ambient and even heavy metal noise, and past works such as Mockroot (Nonesuch, 2015), Luys i Luso (ECM, 2015), Atmospheres (ECM, 2016) and Ancient Observer capture a depth of vision far beyond Hamasyan's years. All of these works showcase a compositional approach which is open-minded, and full of nuance and intrigue.

The compositions he wrote for this album boast well-conceived, vocal-oriented melodies and sophisticated changes. What is evident is that he is a player of great subtlety writing songs full of emotive melodic hooks. "Aragatz" is the highest mountain in Armenia and is the also the name of the city's local soccer club. It is also the title of the album's opening track. It is characterized by an easy and warm melodic grace and hummable vocal melodies, including little details subdued within the harmonies that evoke '70s soul jazz. "Ray of Light" is a beautiful and poignant ballad where the melodies have been subtly embellished and manipulated with the help of electronics for the purpose of achieving a shimmering and layered cinematic effect. It has melodic wanderings that are complemented by moments of harmonic peace and clarity.

All throughout Hamasyan plays with vibrant elegance and exquisite subtlety, especially when he embellishes his piano lines with resonant Armenian folk motifs. "The American" starts as a lovely understated ballad but soon picks up the pace with its lilting, swirling melodies. Built around pulsing rhythmic patterns at moments, it is delirious with feeling and fun. "Self Portrait" is a burst of playful notes infused with kinetic, playful energy. It's one of the album's more upbeat and exuberant pieces and is based on darting, tightly executed patterns. The album bookends with the beautiful folkish ballad "Revolving—Prayer." It's the longest track on this release and it brings out a lyricism and sense of drama. There is a strong life-force that seems to flow through this music.

For Gyumri is a loving tribute to his home city. While it's not a jazz album in any strict sense, there is a freedom and openness to the music. It doesn't always reach for epic dimensions; and it is fine because of that. It is still a deeply absorbing and beautifully-recorded album.