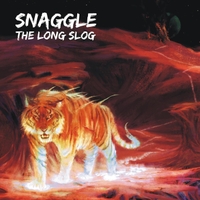 In the art world, labeling oneself as "the next (fill in the blank)" or "(name of country)'s answer to (fill in the blank)" is a risky ploy that may reap short-term benefits in terms of quickly generating a fan base, but may actually be detrimental in terms of creative sustainability. The : Toronto-based jazz-funk- rock sextet Snaggle is a case in point. Their press materials are riddled with phrases such as "Canada's answer to Snarky Puppy" and "the next Snarky Puppy." Like their heroes, they've even recorded an soul / funk EP featuring different vocalists fronting the band. They definitely do sound like a harder- edged, more classic 70s fusion-oriented version of Snarky Puppy.

The Long Slog, their third recording and second full length album, is quite enjoyable from that standpoint. And that's all well and good, but these guys clearly have more than enough talent and chops to do music that doesn't sound like Snarky Puppy... music that sounds like Snaggle. The saving grace is that these guys are already beginning to get to their own style.

The first track, "Snaggle #7" doesn't help. Even though there's some nifty Mike Stern-like guitar from Mike Murray, and Tom Grosset (reputedly the "fastest drummer in the world") does a lot of über-hip Chris Dave- inspired stuff behind the kit, it sounds a great deal like Snarky Puppy's "heavy" schtick. Nick Maclean's mini-moog screams out triumphantly over the horns, just like you'd hear in one of Michael League's arrangements. After a somewhat fitful but appealingly dark tenor-piano duet, "Sad Ritual" also gets into the crunchier terrains of the Snarky Puppy Zone. Again, Murray's crazed guitar playing carries the day, generating the most interest with some inspired—not just impressive—pyrotechnics. Producer Brownman Ali chips in some great throwback wah-wah enhanced electric trumpet on MacLean's frenetic jazz- rocker "Theorum," but it's not enough to stop the piece from sounding like a roomful of Snarky Puppies. The jaunty, happy-go-lucky jam "Nonuhno" also has a strong Snarky Puppy flavor, though it also has roots in the horn-driven jazz-funk of the 1970s purveyed by the likes of the Brecker Brothers, New York Mary, and the John Payne Band.

Snaggle's music is most engaging, however, when it sounds least like its influences. MacLean's "Track 5" is a dark-hued hard-fusion effort with some truly tasty plugged-in tenor soloing by Graeme Wallace , plus the author's own limpid Rhodes, and another gratuitously crunchy guitar solo. "Tree Assassin" starts off as a slow groover which shifts gears slightly to get into some vaguely Middle Eastern-sounding (and somewhat less Snarky) harmonic territory. "Saw" starts out with some weird talk-box effects, and develops into a heavy jazz- funk jam that sounds more like something that Ian Carr's Nucleus might've messed with back in the day. MacLean's Rhodes solo is particularly effective, as he slowly reveals himself to be the talk-box culprit from the tune's opening moments.

The Long Slog is a peculiar album; one that's clearly the product of a highly talented and extremely proficient band, but also one that's disturbingly derivative of a better-known established band. Similar copycat bands were common during the mid-to-late 1970s, particularly in Eastern Europe where the Mahavishnu Orchestra and Weather Report were hugely influential. A lot of great musicians emerged from that scene; guys who eventually found their own style.