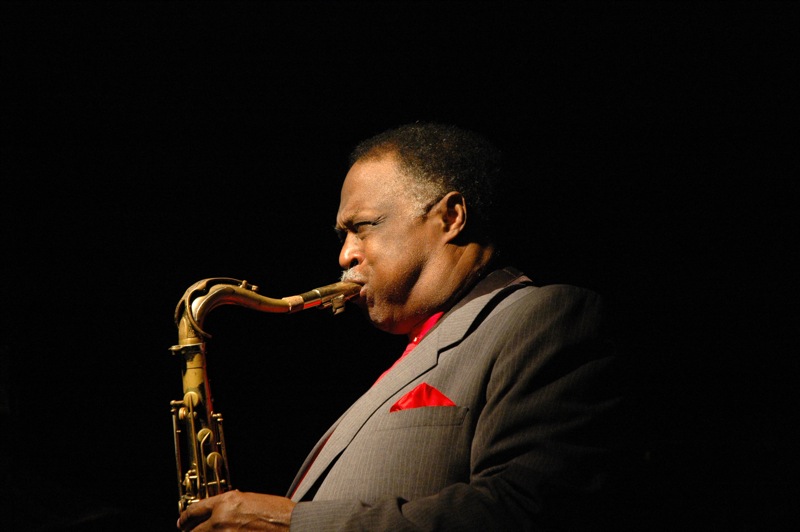 BY ROB ROSENBLUM
January 10, 2017
Sign in to view read count

Decked out in a thousand dollar gray silk suit, perfectly tailored, he seemed to bridge the gap between the club's high end patrons and the many fans of humbler homesteads with a subtle and perhaps unintended inference that, after all, we are all bound together by great music

No rough edges, no experimentation, music just as smooth as chocolate pudding. A perfectly molded musical travelogue down memory lane. Not a formula for a grand performance, but somehow tenor saxophonist Houston Person makes it work, time after time.

Person is a throwback to the simpler and easier times of the 1940's. The songs familiar, the conversation pat, the sound warm and cozy, the temptation to slip into well tested cliché almost irresistible. But it is part of his genius to turn the mundane into memorable. And on the 8th day of January, 2017, he did just that.

Person's warm, but masculine sound and infectious easy swing was on full display. A wonderful gumbo of the gruff Coleman Hawkins, the smooth legato swing of Lester Young with the easy lilt of Johnny Hodges and Benny Carter all informed his little sojourns of familiar tunes that ranged from the slightly trite melody of "Sunny," to the blues drenched, unabashed soulfulness of "Since I Fell For You" to a concert ending stomping blues and finally crowd quieting encore of "What A Beautiful World," sensitively and simply stated.

The concert, sponsored by the Town of Kiawah Island, an exclusive resort area near Charleston, South Carolina, took place in an exquisite country club of Turtle Point, far from Person's more humble roots in Florence, just a hundred miles north. But decked out in a thousand dollar gray silk suit, perfectly tailored, he seemed to bridge the gap between the club's high end patrons and the many fans of humbler homesteads with a subtle and perhaps unintended inference that, after all, we are all bound together by great music.

A great deal of credit is due to the show's producer and the sole percussion member of the band, Quentin Baxter. Even at his relatively young age, he has risen to the top of the Low Country ladder as a percussionist, teacher, and jazz entrepreneur. He did an excellent job with setting up the sound system. The concert was held in a ball room with tricky acoustics and the balance and sound quality were impeccable.

The selection of sidemen also played a big part of the success of the evening. Neither pianist Lafayette Harris nor bassist Matthew Parrish is particularly well known, but they not only offered sympathetic support to the leader, they also gave some very well crafted solos of their own. As for Baxter, his ability to create the proper background, while drawing very little attention to himself, has become an earmark of his success. His brief drum solos on "Sunny" and "Lester Leaps In" was simple, melodic and concise. Furthermore, he knew exactly how to frame the solos of his band mates, with subtle little accents and cymbal splashes. His brush work was delicate and thoughtful, adding just the right colors to ballads.

Harris exuded joy in the perfectly tuned baby grand and in mixing it up with his co-conspirators. His playing was spare, bringing up images of the MJQ's John Lewis at times. He was given total ownership for an exploration of Scott Joplin's "The Entertainer," which morphed into Duke Ellington's "It Don't Mean A Thing." He demonstrated a real comfort with the kind of stride piano often associated with the bygone era of Willie "The Lion" Smith—a rare treat. He brought it back home with the more staid ragtime of the original melody.

Parrish's time was on the nose and he displayed ample technique, in total control over what can be an ungainly instrument. His sound was nice, fat and warm although with an occasional buzz to it. There were a few bass solos, but with the exception of "Nice 'n Easy," where Person playfully parried with him before setting him free to go off on his own, they were brief.

Person has used his 60 plus years of experience to craft a flawless performance. He keeps the melody at the fore, stays well within the attention span of his audience, varies tunes, keys, tempos, the order of solos—in short he does everything within his power to produce a well molded work of art. Even his brief monologues to the audience were effortless and well edited. While he conceded to the audience demand for an encore, his exhibition was complete without it.

Person is obviously fond of the melodies he plays. His solos pay tribute to them even as he veers into his own personal expressions of them. He states the theme, adding all the familiar little runs and Hawkins like triplets and his trademark shouts and cries that he pulls out of his horn, all the while keeping the original song stamped on the listener's mind. There is a kind of majesty in his exhortations that hearkens to an earlier, simpler and more satisfying time.

Jazz, like any music, cannot be stagnant and still thrive. But Person's first rate performance is a reminder that as we move forward, we all need to remember the foundations of the music that has brought so much joy to the world. Listening to his nearly perfect portrayal of the music he exemplifies, the reverence for pretty melodies, the recognition of those who are open to his lyrical story, the understanding of pacing, of varied endings, of giving each song a unique structure and identity, makes you appreciate the genius of the perfect story teller and yearn for it in the midst of a sometime chaotic and disjointed era of jazz performance.