By GREGG AKKERMAN
July 3, 2012
Sign in to view read count
[Editor's Note: The Last Balladeer: The Johnny Hartman Story (Scarecrow Press, 2012), by Gregg Akkerman, is the long-overdue biography of a singer who, amongst other things, achieved considerable fame for his classic collaboration with intrepid saxophonist John Coltrane, John Coltrane and Johnny Hartman (Impulse!, 1963).] 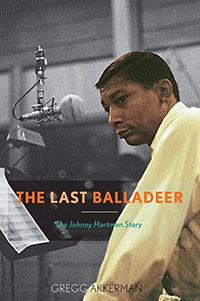 Several years ago I was riding in a car to a jazz gig with a few cohorts when "Lush Life" from the iconic John Coltrane and Johnny Hartman album began playing on the stereo.

"I heard everything on the album was recorded in one take," said my friend in the driver's seat.

"You know, Johnny Hartman was only 17 when he joined up with Earl Hines," said another.

Still one more passenger chimed in, "Hartman never got more famous because he spent most of his career overseas."

The conversation then waned into silence before shifting into a 30-minute discourse on the merits of John Coltrane's use of the Phrygian mode. That summed up nicely the situation for Hartman. There he was, the beloved vocalist on one of the most important vocal jazz records ever made and all he elicited from our small group of ardent jazz fans was three comments—and all incorrect comments at that.

Hartman had somehow escaped the glare of jazz journalism since his death in 1983 from lung cancer. In 1995, his career enjoyed a posthumous spike in popularity following the use of his recordings in Clint Eastwood's The Bridges of Madison County but at the time, the press reported on him in near mythical terms using only one or two error-ridden articles as sources. Hartman was described in ghostly, beyond-human terms which superseded reliance on the earthly reality that he might have merely been a man who worked hard, walked his daughters to school, passed out business cards with his home number, and had a wife with a day job.

Hartman had become more legend than man, and legends don't need to have their stories straight. Within the liner notes for each new CD reissue, his story got increasingly vague. The same few quotes were regurgitated, and sometimes even mutated, making their next appearance still further removed from the original intent. Suppositions reported as fact became fodder for the next writer unwilling to check the source material. Legends don't need inconvenient details to get in the way.

And now, after several decades of mostly inadvertent mythologizing, even Hartman fans with the best of intentions don't really know anything about the man they so adore when hearing his "My One and Only Love," "I'll Remember April," or "I See Your Face Before Me."

I decided in early 2010 to clarify Hartman's legacy and document the story while I could still track down enough of his family, friends, and peers. The resultant book, The Last Balladeer: The Johnny Hartman Story (Scarecrow Press "Studies in Jazz" series, 2012) is the result of two years' work, and worth every minute to me. I won't say I uncovered every fact and figure on the man, but I damn well gave it a shot. If nothing else, I came across Hartman's prized recipe for gumbo in an obscure magazine now long out of print. I'll at least get a good meal out of the effort.

To me, Hartman has grown to represent the very voice of romance in our times. The unadorned, molasses-sweet, sanguine tone of his baritone voice transcends the years to share stories of love and hope in a century he never saw and yet perfectly understood. He knew love would still fill our dreams, and hope would still keep us searching for that very love we crave. Hartman died all too young at the age of sixty, but the secrets to life were already his, and we can hear about it anytime one of his ballad recordings reaches our ears. And now you can read about it too.

Below is an excerpt from Chapter 12 of The Last Balladeer: The Johnny Hartman Story, in which Harman gets his first booking at the Newport Jazz Festival in 1975. Please visit www.johnnyhartmanbook.com to order a complete copy.]

In the summer of 1975, New York City smelled bad. The wildcat strikes of the sanitation workers caused the trash to pile up on the sidewalks and the resultant odor became front-page news. In the midst of this predicament, Johnny Hartman made his first appearance at the Newport Jazz Festival, a major opportunity for him to re-connect with jazz fans and parlay a solid performance into years of gigs. But if the printed reviews are to be believed, he did little to sweeten the city air. He took the stage during the evening of July 1, as part of the "Schlitz Salute to Jazz and the American Song" at Avery Fisher Hall. Each of the various acts was expected to interpret the music of a well-known composer of popular song, and for Hartman that meant his idol, Duke Ellington.

ADVERTISEMENT
Other artists on the bill included Zoot Sims with Jim Hall, Cy Coleman, Helen Humes, Margaret Whiting, and Chet Baker. With such a stacked billing, the evening received copious press coverage and was well attended. Considering the importance of the concert for Hartman, it's inexplicable that he chose to stray from the assigned Ellington material and thus raise the ire of several men with mighty pens. New York Times critic John S. Wilson was in attendance and, although he often made vociferous efforts to praise Hartman, of this night he wrote, "Johnny Hartman, an effective singer who was scheduled to do Duke Ellington's music, fluffed off the Duke with only two songs and filled out his segment with such things as "On a Clear Day."(1) Respected jazz writer Whitney Balliett dryly recalled several reasons the evening was a let down, among them Hartman, who, "struggling with his intonation, celebrated Duke Ellington by singing two Ellingtons, one Billy Strayhorn, one Kurt Weill, a blues, and "On a Clear Day."(2) Photographer/graphic designer Burt Goldblatt, who had a soft spot for Hartman since their days with Bethlehem Records, couldn't bring himself to specifically criticize the singer and instead simply lamented, "It was not one of jazz's finest hours."(3)

In Hartman's defense, these gentlemen missed the mark on several points. Of the six songs performed by Hartman, two were by Ellington and an argument could be made that Strayhorn's "Lush Life" counted as a third. Second, Hartman justified his inclusion of Weill's "September Song" by sharing how Duke had specifically requested that he sing it at a previous gig. Third, Hartman's intonation was excellent throughout the concert (better than many instances heard on the recently released I've Been There anyway) and what may have sounded to the audience like pitch problems was more likely the result of technical troubles mixing the voice in the sound system. Another irritation to the crowd might have been the awful jokes and abrasive voice of the emcee, Phyllis Diller. One journalist wrote, "She was vulgar, tasteless, [and] foolish. A complete waste of time on everyone's part."(4)

Before introducing Hartman, Diller attempted to ingratiate herself to the audience with some of her nightclub punch lines but the crowd's response was tepid at best. Faced with the difficult task of following Diller's stale humor, Hartman led off with a rare (for him) reading of Ellington's "Sophisticated Lady." Opening with a ballad is always a challenge but, making matters worse, several phrases went by before Hartman's microphone level was adjusted loud enough to be clearly heard over the piano of Ellis Larkins. The audio mix was corrected by the song's bridge section but Hartman elected to only present one full chorus so by the time bassist Milt Hinton and drummer Walter Bolden joined in, it was nearly time to finish. Hartman's last note could be interpreted as off-pitch but the problem is more accurately placed in Larkin's choice of improvised chords that didn't support the sustained vocal note. This kind of spontaneous imperfection is an undesired but typical aspect of live jazz performances where rehearsal might consist of nothing more that a "talk through" moments before taking the stage. Perhaps Larkins played a chord sequence that was perfect for a typical last note from Ella Fitzgerald (for whom he often played) on the same song but not the one Hartman chose.

Hartman's second selection for the evening was puzzling. With well-known Ellington rhythm tunes available like "Satin Doll" or "You Better Know It," (both of which Hartman would record for a radio broadcast the following year) it made no sense that he so quickly abandoned Duke for a rendition of "Sometimes I'm Happy." The opening sixteen bars featured only vocals and walking bass and if anyone was having intonation problems at that point, it was the normally impeccable Milt Hinton. The veteran pro played as if he couldn't properly hear Hartman's voice, or his bass had simply gone out of tune in a hall packed with heat-emanating bodies. He faired better on "Don't You Know I Care," just as he had on 1963's I Just Dropped By to Say Hello. Hartman's confident and rich delivery of the clever lyric only raises the question, "Why isn't this song performed more often?" His ruminative take on the melody was probably all it took for Balliett to confuse it later for a slow blues.

Once more dismissing Ellington, the group next played a swinging version of "On a Clear Day," a song consistently included in Hartman setlists throughout the 1970s. Larkins laid down a fiery piano solo that earned a burst of applause but, once again, the ending was hindered by lack of rehearsal. Next, Hartman offered an abbreviated version of his typical spoken introduction to "Lush Life" before delivering a stunning rendition. Although Hartman didn't feel it necessary to regularly perform all six songs from his Coltrane collaboration, Strayhorn's "Lush Life" became a fixture of nearly all his appearances and his masterful experience with the song showed. Hartman described how he kept his approach fresh for a song he sang so often: "I think I've changed the way I sing it over the years...the more you sing a song, you are apt to change it. It reflects the moods that you're in."(5)

After five selections, Hartman had warmed up to the audience and shared a brief story about Ellington once requesting that Hartman sing "September Song" as long as he could include the introductory verse. He gladly complied. Compared to his 1955 version on Songs from the Heart, Hartman now presented "September" with a seasoned maturity that caressed every nuance in the lyric. When Hartman sang about precious and vintage years, he now possessed a hard-earned credibility that was unavoidably absent in the earlier draft. After decades of singing to people all over the world, Hartman had become a master story teller and the reverence awarded him by the subdued Newport Jazz Festival audience was palpable. A rancor may have hung over the city that night, but during Hartman's four Ellington-related performances, the air above Avery Fisher Hall was filled with delight.