The Worst Pop Band Ever: Sometime Things Go Wrong (and other songs we shouldn't play) 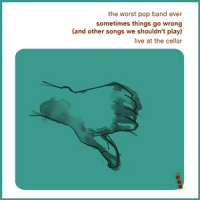 Recorded live at Cory Weed's Cellar Jazz Club in Vancouver, The Worst Pop Band Ever's Sometime Things Go Wrong (and other songs we shouldn't play) is music for people, whether they dig jazz or not. The group delivers a set that cares less about genres, as heard in its breezy cover of Sly and the Family Stone's 1973 hit single, "If You Want Me to Stay." There's no crossover message here; just a tight band playing with substance and feeling for an appreciative audience.

The song's lyrics were written and sung by the Family Stone's iconic leader—a message from Sly Stone to his lover that includes the well-known verse of self-expression:

If you want me to stay

I'll be around today

To be available for you to see

I'm about to go

And then you'll know

The WPBE maintains that sentiment, with a rendition that shows appreciation for both pop and jazz. From the onset of Drew Birston's ethereal improvised intro leading to the song's famous bass riff, the melody dances with jazzed improvisation via expressive solos by saxophonist Chris Gale, pianist Adrean Farrugia, and colorful embellishments via scratches and mixes from turntablist LEO37 as drummer Tim Shia holds down the funky rhythm. LEO37 ends the piece with some turntable magic that gels perfectly. The lesson here: when old and new schools combine, it can be a very cool thing.