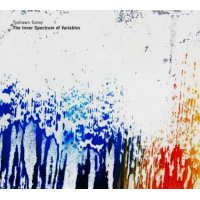 Tyshawn Sorey has realized a career's worth of accomplishments, accolades and appointments despite a professional resume that—with the exception of Vijay Iyer's Blood Sutra (Artist House, 2003)—is not quite ten years in the making. On the verge of his doctoral degree in composition at Columbia University, he has composed almost two-hundred works, and received the 2015 Doris Duke Impact Award. He is now set to replace the retired Anthony Braxton as Professor of Music at Wesleyan University in 2017. One of the most frequently sought-after drummers in the jazz world, he has recorded or performed with Wadada Leo Smith, John Zorn, Muhal Richard Abrams, Steve Lehman and Myra Melford as well as Iyer and Braxton.

Following Sorey's highly acclaimed Oblique—I and Alloy (PI Recordings, 2011, 2014), his two-CD The Inner Spectrum of Variables continues to capitalize on Sorey's expansive compositional and theoretical knowledge base and his unique expression of musical ideas. Inspired by the unflinching experimentation of the late Butch Morris, Sorey uses the cornetist/composer's method for leading improvisers and crafting arrangements as music reveals itself in real time. To that end, Sorey recorded The Inner Spectrum of Variables in a single fifteen-hour session. There are other influences at work as well: the AACM, Schoenberg and Bach, Steve Reich, Morton Feldman and Frank Zappa, among them.

Sorey's regular associates, pianist Cory Smythe and bassist Christopher Tordini are joined by Fung Chern Hwei (Sirius Quartet) on violin, Kyle Armburst (Metropolis Ensemble) on viola and cellist Rubin Kodheli (Brooklyn Rider). Each of the two CDs consist of three compositions; movements of the larger work. Disc One's "Movement I (Introduction)" and "Movement II" exude the attributes associated with classical ensemble style while "Movement III" sees a shift toward the more avant-garde. The insistent hum of the strings against Smythe's spikey piano creates an atmosphere of building tension, forcing the strings out of their natural environment.

Disc Two opens with "Reverie" and for the first six of its fifteen minutes, Sorey solos on an assortment of percussive devices, to mesmerizing effect. What remains is for the most part a spare but intense violin overlaying the drum set. "Movement IV" sees both sides of the double-trio making individual statements before coming together in an exotic swirl of sounds. "Movement V + VI + Reprise" closes the work starting from a relative whisper before taking a nomadic journey that is grounded in the fundamental elements of both trios, but never settling as tones and scales frequently shift.

Sorey doesn't so much blur the line between the conventional roles of the ensemble and jazz trio, as he does allow their individual voices tell two sides of the same story. The lyrical intricacies central to the suite are frequently intermingling their attributes as living entities would do in such close proximity. There is a spontaneity and natural flow in the mix of components that make up The Inner Spectrum of Variables and they belie the complexity and scope of Sorey's vision; it is the vision of a modern master.