King Khan: The Infinite Ones 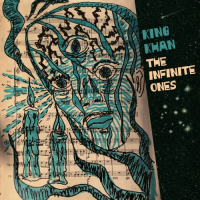 Something about the vibe of this completely wonderful album, and the milieu which its record label inhabits, puts one in mind of Beat poet Lawrence Ferlinghetti's self-published limited-editions of the 1960s. These were, according to information given on page three, "Printed, published, freaked out, & zapped by the Fuck You/ press at a secret grope-bunker somewhere in the Lower East Side, New York City, U.S.A."

King Khan (a.k.a. A.A. Khan or the artist formerly known as The Blacksnake) is a composer and multi-instrumentalist based in Berlin, where he operates the Khannibalism label and records and produces at Moon Studio. Khannibalism's off-the-wall catalogue spans music and the spoken word. There is a direct link to Ferlinghetti and the Beats in the label's 2016 album Let Me Hang You, which features extracts from The Naked Lunch read by William S. Burroughs. (The producer and Burroughs associate Hal Willner had sent Khan the tapes and asked him to add his gris gris, which he did with the help of guitarist Bill Frisell, keyboardist Wayne Horvitz, trumpeter El Congo Allen and others).

Musically, The Infinite Ones is inspired by the moody electric musings of Miles Davis and the space music of Sun Ra. Among the fourteen-strong collective personnel are Arkestra reed players Marshall Allen and Knoel Scott, who are featured on two tracks. Check (see below) the Black Lives Matter-focused YouTube accompanying "Follow The Mantis," featuring El Congo Allen, for some of that old Davis-inspired magic. Or hear fellow trumpeter Martin Wenk's take of it on "(White Nile) Flows Through Memphis." Trumpets figure large in the nine tracks not featuring Marshall Allen and Knoel Scott—as do sumptuous, non-thumping grooves. The album ends with "Hal," dedicated to Hal Willner, who passed in April 2020.

Khan says that the album is : "a tribute to the great composers who have inspired me: Alice Coltrane, Rahsaan Roland Kirk, Philip Kelan Cohran, Bernard Herrmann, Ennio Morricone, Miles Davis, Sun Ra, John Carpenter, Quincy Jones, Old Bollywood, Film Noir, to name just a few.... In my lifetime I never thought I would see the deaths of 'Celluloid' or 'analog recording.' I refuse to accept the coroner reports on said fatalities, so here is my offering to the canon of cinematic overtures and analog self-preservation, for the films in our heads yet to be made." A total, magical, wrap-around, deep strata, Good Housekeeping Seal of Approval, stone delight.